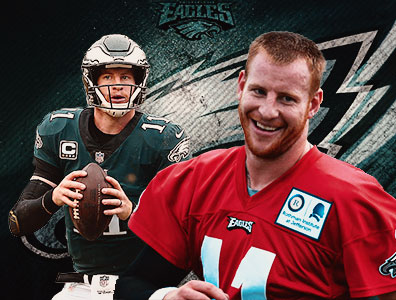 The Philadelphia Eagles and all star quarterback, Carson Wentz, agreed to a hefty contract extension on Thursday, June 6th, 2019. The deal is reportedly a 4-year extension worth approximately $128 million keeping the QB from North Dakota in the city of brotherly love through the 2024-2025 NFL season.

The new agreement involves $107.9 million in guaranteed money including a $66 million signing bonus. Considering all the contract incentives, the deal carries a maximum value of $144 million. When combining his previous contract with this extension, the total comes to 6 years and $154 million with the potential to increase to a max value of $170 million.

The Philadelphia Eagles made a risky decision…

…but it does have a high reward proposition if everything works out. Wentz will need to remain healthy as he has been extremely injury prone over the first few years of his NFL career. Reportedly, his condition looks good during OTA’s, but we will see if he can avoid getting banged up through the course of the next several seasons.

This now extremely well-paid quarterback will also need to perform at a very high level. Under the terms of the new contract extension, he will be receiving more guaranteed money than Russell Wilson with his recent agreement with the Seattle Seahawks this past offseason. Wentz definitely has all the right players around him to help him succeed, so it is up to him to run the Eagle’s offense efficiently and make deep runs in the NFL playoffs over the course of the next six years.

"Hearing that, I mean it's exciting just the idea of being here long term," Wentz explained last April. "I love it here. I love the fans, I love this city. I'm not going to dive into that. My agent will handle all that fun stuff. Just the idea is exciting without a doubt.”

"I think it’s just the culture, the sporting culture, in this city. Everyone just loves their sports here and is passionate about it, and it just kind of catches fire within other teams and other athletes. It’s always good to support each other and have some fun with it. But I think it really just comes down to the way this city is with it’s sports and the way they get behind everybody, and we want to do the same."

"I can't even explain to you how excited I am right now to be a part of this great city for this many more years," added Wentz. "From the moment I got drafted here, I knew this place was special."