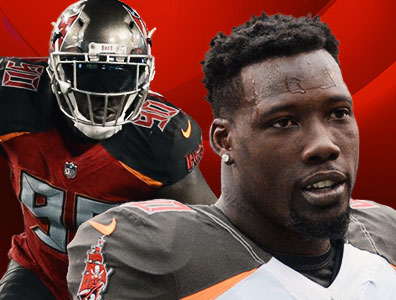 The Tampa Bay Buccaneer’s defensive end and aggressive pass rusher, Jason Pierre-Paul, was involved in a single car auto accident last week in south Florida. He and another passengers were reported to be ok after the crash, but now sources are reporting that Pierre-Paul’s injury may be worse than originally thought.

As of Tuesday, May 7th, 2019, reports are surfacing that say Pierre-Paul may need year-ending surgery on his neck, which would most likely sideline him for the entire 2019-2020 NFL season. This is bad news for the Bucs as he had a great performance throughout his last year playing defensive end for Tampa Bay.

ESPN’s Jenna Laine first reported last week that Pierre – Paul was ok after the car accident, but apparently this was not true as she subsequently released this, “I was told last week by a source very close to JPP that he was "OK." This is a devastating blow to a Bucs defense that didn't prioritize defensive linemen in the draft, largely because they were counting on Pierre-Paul.”

Adam Schefter is known to be one of the most reliable and accurate ESPN sources for the NFL, and this is what he said on the morning of Tuesday, May 7th, 2019, “Tampa DE Jason Pierre Paul suffered a potential season-ending fractured neck injury in a single-car accident last week in south Florida, league sources tell ESPN. Pierre-Paul will visit neck specialists this week to get their opinions to see if there’s hope to save this season.”

Schefter goes on to say, “While Buccaneers' DE Jason Pierre-Paul will be visiting this week with neck specialists, the belief is that he likley will need surgery for his fractured neck, per source.”

General Manager of the Buccaneers, Jason Licht, had this to say immediately following the car accident last week, "We have been informed that Jason was involved in a one-car accident early this morning in South Florida in which he was not cited. We know that he was evaluated at a local hospital and has since been released. Our immediate concern is for the safety and well-being of Jason and his passenger. We have been in contact with Jason and will be getting him further evaluated by our medical staff in the near future."

On the afternoon of Tuesday, May 7th, 2019 Licht released this statement, "As we stated last week following the news of Jason's auto accident, our immediate concern was for both Jason and his passenger. While Jason was treated and released in south Florida the same day of the accident, we wanted to ensure that our medical team had an opportunity to perform a thorough evaluation here in Tampa, and that process is currently ongoing."

On the Fourth of July in 2015 Pierre–Paul suffered a horrific firework accident outside his Florida home in front of many of his friends and family. He blew up his hand on a firework that caused him to lose his entire right index finger and pieces of other fingers on his right hand. Doctors attempted to repair his hand as best as possible with approximately 8 surgeries.

Having missed half of the 2015 – 2016 NFL season due to his incident, his absence ended up costing Pierre-Paul a lot of money. In 2014, then with the New York Giants, Pierre – Paul had 12.5 sacks which is an outstanding total for the year. After the firework accident he has not recorded a double digit sack total until last year when the defensive end once again ended the season with 12.5 sacks. Now after a second non – football injury involving this car accident it may end up costing him a great deal of money once again.

ESPN’s Jenna Laine discusses the possible financial future Pierre – Paul by saying, “Jason Pierre-Paul is to make $14.9 million this year, plus incentives. What's interesting is that $7.5 million of his base salary became fully-guaranteed on March 15. But that guarantee doesn't cover a player placed on the non-football injury list (NFI). They can get out of this.”

It appears a lot is still up in the air, but things are not looking good here for him nor the Tampa Bay Buccaneers. The most important thing is that he will come back strong as neck injuries are complicated and serious. I wish JPP a solid and long term successful recovery whether this neck injury requires surgery or not.