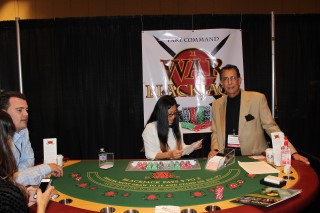 I first saw War Blackjack at the Downtown Grand in Las Vegas on May 9, 2014. I'm told it was already at the Carson City Nugget and the Eureka in Mesquite by then. The game is a combination of War and Blackjack. The humdinger is that if the player wins the war bet, then he may parlay the win to his blackjack wager, already knowing his first card and the dealer's up card.

* I have a report this game is also at the Coventry casino in the UK, where they don't deal a dealer hole card. While this rule depresses the blackjack expected value, it doesn't affect the strategy or value of the War wager.

The strategy for parlaying the War bet is shown in the following table. 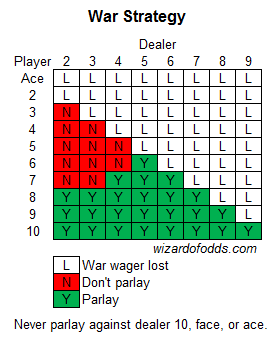 Another way to express the Parlay strategy is as follows:

Play the blackjack hand according to the appropriate basic strategy for the table rules.

The following table shows the expected value of the blackjack wager, based on the player's initial card and the dealer's face-up card, in situations of a winning War wager only. The table is based on infinite decks, where the dealer hits soft 17, double after split is allowed, and surrender is allowed. A "loss" in the table signifies that the player lost the wager so has no parlay decision to make. The player should parlay a winning War bet in any situation with a positive expected value.

Based on these rules, I calculate a house edge of 1.16% on the War wager. This includes the value of any parlayed portion on the blackjack wager.

My house edge calculator shows the house edge under these blackjack rules is 0.48%.

I don't want to quote a blended house edge, because the player can make the War and Blackjack wagers in any ratio he wishes, except a Blackjack wager is required.

Whether you call this a side bet or a new game, a house edge of 1.16% is low compared to other new games. However, if you're looking to lose as little as possible at this game, then that would be achieved by betting the blackjack wager only.