Super Times Pay Super Stacks is a video poker variant by Action Gaming. As usual with Action Gaming products, it is an optional feature places on top of multi-play games available in 3-play, 5-play, and 10-play.

Super Times Pay Super Stacks may be played as conventional multi-play video poker if betting one to five coins per hand. The player has the option to bet ten coins per hand to invoke the feature. If the feature is invoked, then randomly, some hands will randomly get both a multiplier and extra hands. When the feature is activiated, the player is shown at the same time as the deal.

The probability of getting the feature with ten coins bet per hand is 1/11.

When the feature is activated, the average multiplier is 4.06.

In three-play mode, when the feature is activated, the average additional hands is six with a maximum of nine extra hands.

In five-play mode, when the feature is activated, the average additional hands is ten with a maximum of 16 extra hands.

In ten-play mode, when the feature is activated, the average additional hands is 20 with a maximum of 30 extra hands. 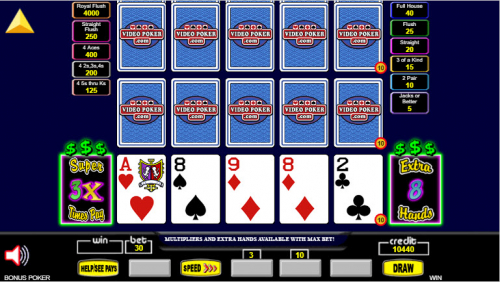 In the image above, I was playing 3-play Bonus Poker. The feature was enabled, which granted me a 3x multiplier and 8 extra hands, for a total of 11 hands. I would choose to hold the pair of 8's. 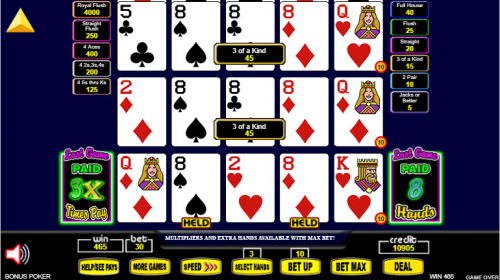 The next image shows the my original three hands. Two of them improved to a three of a kind, which has a base win of 3 for 1. 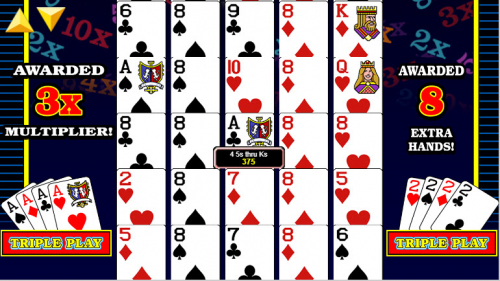 The next image shows the first five of my eight extra hands. The middle hand improved to four 8's, which has a base win of 25 for 1. 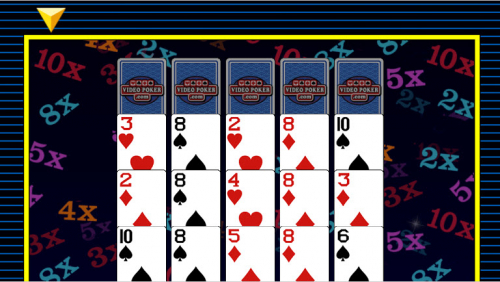 The final image shows the last of my three extra hands. None of these improved.

The strategy is the same as that of conventional video poker.

The math for the feature is easy to calculate if the base game return is known. One in 11 hands the player will get a multiplier of 4.06 and get three times the usual number of hands.

In other words, whatever the base return of the game is, multiply that by 1.0082 to get the return with the feature.

The following table shows the return for various games and pay tables for both 5-coin and 10-coin bets. I do not claim Action Gaming offers all these pay tables.