Sic Bo, meaning "dice pair" is an ancient Chinese gambling game. It is very popular in Macau, in my estimation second to baccarat only. In the United States is often found in the Asian gaming rooms, especially in Atlantic City. The large Las Vegas properties will usually have one table in the general casino.

The game uses three dice and a table with a variety of betting options on the roll of those dice. The odds and table layout may also vary from place to place. However, the payoffs are the same across Atlantic City and Macau, but different from each other. In Vegas and on the Internet casinos, anything is possible. In fact, I have a whole page about playing sic bo online. 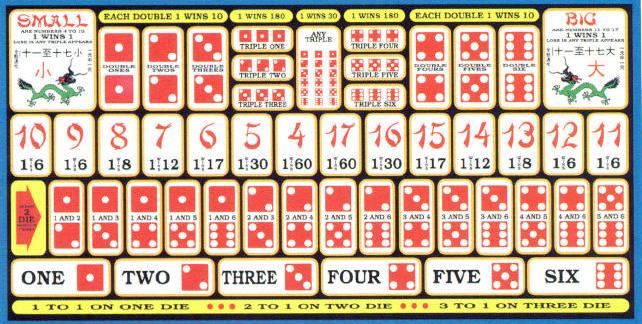 Image take from the Claridge Hotel/Casino rule book. Click on the image to see the rules on the next page.
Following is a list of the bets available. The payoffs vary on some bets, from casino to casino. For those bets, I indicate a range of viable payoffs. Please note that there is no universal acceptance on the titles of most bets. Other sources may use different terminology.

The following list of bets can be found on any self-respecting sic bo game. It is followed by a list of some more uncommon bets.

Following are some bets that are rarely found in sic bo, but have been known to exist.

Following are tables summarizing each bet under the Atlantic City and Macau rules.

Following is a table summarizing each bet under the Macau rules.

Following is a table summarizing each bet under the Australia rules.