Hi guys, this is Mike.

You are going to learn how to calculate the odds in the game Sic Bo. Real briefly, Sic Bo is a very ancient Chinese game based on rolling three dice. There are a whole host of bets to choose from in the game. 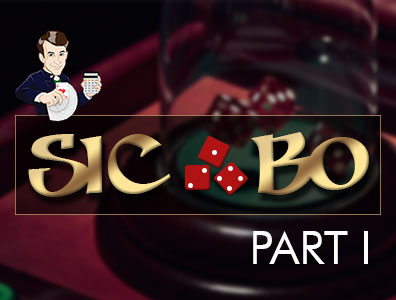 What I'm going to do:

Once we're armed with the answers to those questions…

…we can go on to part two and analyze what kind of value you're getting with all the various different bets in Sic Bo.

Let's answer the question: "What is the probability of throwing any given total with three six-sided dice?" This technique that I'm going to show you will work for any number of dice.

I would like to give credit to Robert Goodhand of Somerset, UK for this tricky little technique here. It is covered in my Ask the Wizard column 264. I'm going to share it with you now.

First, what we need to do is just define five dummy squares. You will see why in a minute. Now, I am going to list every total from 1 to 18. With one die, there is obviously one way to roll a 1, 2 or 6.

Each face has one side so it's pretty obvious. With two dice, what you want to do is take the sum of the column to the left, in this case, the B column, starting with one cell going to the left end up and then the five cells above that. 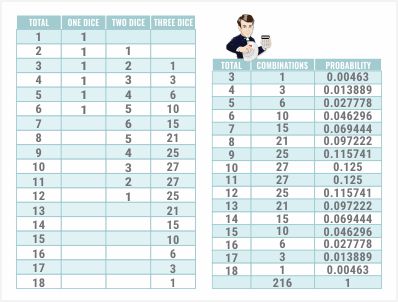 In the case right now…

…I'm working with cell C8. This represents the number of ways to roll a total of two with two dice. I am taking the sum of the values in cells B2 to B7. If the cell is blank, Excel correctly just assumes that it's a zero.

Well, why does this work?

the first die has to be a total of one to four. As long as the first die is in that acceptable range, there is one way the next die can achieve whatever total you are talking about.

Let's go on to three dice

It is exactly the same technique. We can just copy and paste the same formula. I could take this from anywhere in the range we just did. I'll just do here, copy and paste it one cell to the right and copy and paste it down. There we have the number of combinations for any total from 3 to 18 with three dice.

To get a total of seven…

…your first two dice have to be a total from two to six. We just saw that the total number of ways that can happen would be the sum here from one to five which is 15. Let's put this all in a nice handy table. Again, here is your total.

Here are the combinations:

Let's take the total of that, 216. That number looks familiar. Perhaps, it could be six to the third power. 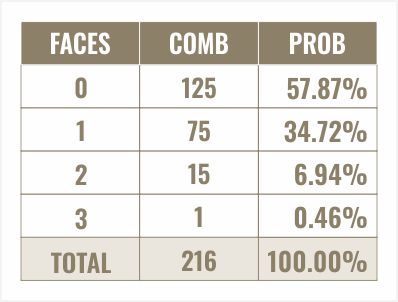 Finally, let's find the probability of each total:

We just take the number of combinations divided by the total. There is the probability of rolling any given total from 30 to 18. Next, let's look at the probability of throwing any particular die face zero to three times. There are six different bets in Sic Bo, one for each die face.

We do not add, we multiply.

I love thinking about things in combinations first. Let's say you just pick the six, for example. What are- I should say is the number of combinations of the way that six can appear all three times on three dice? Well, it's simply one. There's only one way it can happen, 6-6-6. How about twice?

How about the number of ways it can appear once?

How about the number of combinations of not rolling any of your chosen die face?

Well, each of the three dice can be one of five things. Five dice- I mean, three dice, five different combinations for each one other than your chosen face is 5 x 5 x5 combinations or 125. Let's take the total of all these combinations and we get 216 again. Again, that is six to the third power so I must have done something right.

Finally, let's look at the probability

We simply take the number of combinations divided by the total combinations. Let's put that under percent. Here we see the probability of rolling your chosen face zero times is 57.87%, once, 34.72%, twice, 6.94% and three times, 0.46%.

I hope that was clear. I hope to see you over in part two where I calculate the odds of lots of different Sic Bo bets.

This document has been composed with the instant HTML edior tools. Click here and test it for free.