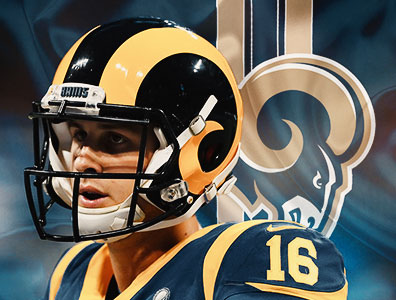 On Tuesday, September 3rd, 2019 once again a major record breaking NFL contract extension was granted to another star quarterback in the league. The Los Angeles Rams and their young and exciting quarterback, Jared Goff, agreed to a 4-year deal locking in the former number one overall draft selection through the 2024-2025 NFL season.

This latest starting quarterback contract extension is worth $134 million, and it reportedly includes $110 million in guaranteed money breaking the former NFL record of $107.9 million in assured cash. This recent announcement reinstitutes the notion that a solid and reliable quarterback is the most valuable player asset that a franchise of the League covets.

How Goff Originally Ended Up in LA

During the 2016 draft, the Rams traded up from the fifteenth overall pick to the first overall selection in order to choose Goff out of Cal with that number-one spot. It is interesting that the second draft pick was Carson Wentz to the Philadelphia Eagles. The Rams gambled extensively by sacrificing quite a bit to acquire that first overall pick from the Tennessee Titans in 2016, but it appears to be paying off nicely so far.

With the 2019-2020 NFL season starting on Thursday, September 5th, 2019 (Chicago Bears vs. Green Bay Packers) Goff will be beginning the fourth year of his original 5-year rookie contract with the Rams. He is set to make $4.3 million in earnings this season as well as $22.8 million for the 2020-2021 schedule of games. With the following four years in addition to those two mentioned above, he will earn a total of $161 million over the course of the upcoming 6 seasons.

In the 2016-2017 season, Goff lost all of the seven games in which he started for the LA team. He lost those games with an average margin of 19.4 points as well. He recorded a completion percentage of 54.6% that year which was the second worst out of all starting NFL quarterbacks that qualified for rankings due to the minimum pass attempts required.

His 63.6 QB rating was good for 31st place in terms of qualifying quarterbacks with the necessary pass attempts. The former head coach of the Rams, Jeff Fisher, was fired prior to the last three games of 2016. Current head coach, Sean McVay, was hired during the offseason to lead Los Angeles into the 2017-2018 NFL season and beyond.

Throughout the last two years the Rams have went 24-7 with Goff as their starting quarterback. His completion percentage increased to 62.1% in 2017 and 64.9% in 2018. His 60 touchdowns and 19 interceptions provided Goff with a very reasonable TD/INT ratio over the last two seasons.

Goff’s QB rating of 100.5 in 2017 and 101.1 in 2018 was fifth and eighth respectively amongst NFL quarterback who qualified. Last year he carried the Rams to win the National Football Conference placing them in Super Bowl LIII in which they lost to Tom Brady and the American Football Conference champion New England Patriots 13-3.

Although I believe Goff and the Los Angeles Rams will have another solid winning NFL season in 2019-2020, I predict the Seattle Seahawks to win the NFC West division this upcoming year. My guess is that the Rams will clinch a playoff position via one of the Wild Card spots in the NFC. They should finish the regular season around 11-5 overall.

Traditionally, it is extremely difficult to make it back to the Super Bowl the year after losing in one so I do not believe their 2019-2020 season will be as successful as last year. However, I do predict that Goff will find his way back into another Super Bowl sometime in the future, and hopefully his team has a better performance if that does occur.

“Jared Goff and the Rams Pledge Their Long-Term Futures to Each Other: The Rams signed the quarterback to a four-year extension on Tuesday and made a bet that head coach Sean McVay can continue to get the best out of their former no. 1 pick”, Danny Heifetz, theringer.com, September 3, 2019.