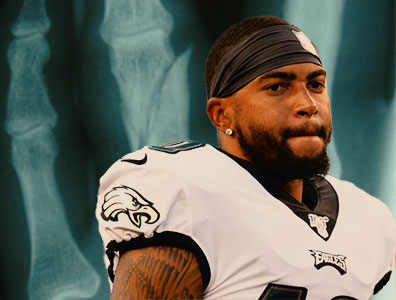 During a team practice on Tuesday, August 27th, 2019 the Philadelphia Eagle’s Pro Bowl starting wide receiver, DeSean Jackson, broke his left ring finger. Philadelphia is fairly confident that Jackson will be ready to play against his former team in their first regular season game against the Washington Redskins in week one of the NFL.

Jackson was approached by the media at his locker after Tuesday’s practice, but the superstar receiver declined to speak as he was clearly in pain. He has been one of the hardest working and most impressive players throughout the Philadelphia Eagles’ training camp as reporters have noted he makes an amazing play on a daily basis at practice. Most of which have been on long passes from his starting quarterback, Carson Wentz.

Other Notable Injuries for the Eagles

Defensive tackle, Fletcher Cox, has a foot injury, cornerback, Ronald Darby, has a knee issue, linebacker, Nigel Bradham, is suffering from an injured foot, and right guard, Brandon Brooks, is dealing with an Achilles injury. The status of all of these football players is still in question, and none of them are guaranteed to be ready to play in the Eagles’ first game 12 days from now against the Washington Redskins. Quarterback Wentz should have all of his starting offensive threats good to go by the first game of the year for the Philadelphia Eagles. DeSean Jackson was reacquired from the Tampa Bay Buccaneers during the 2019 NFL offseason.

"I think in his past he would pull himself out of practice from time to time or whatever it might be, but he doesn't do that. He wants to practice," Philadelphia Eagles head coach, Doug Pederson, stated. "And he wants to be with his guys. And that's something, I think, that comes with maturity and with experience, and of course being on a new football team causes him to want to be that way. He's been professional about it his whole time here."