Lucky Cat Blackjack is a game by game inventor Geoff Hall. This one plays like conventional blackjack, except if the dealer gets a 22 (in version 1) or busts on any total (in version 2), then special Lucky Cat dice are rolled to determine the outcome.

As of June 2019, Lucky Cat Blackjack can be played at the Golden Nugget in Las Vegas and Internet casinos using Genesis Gaming software.

According to the math report, there are two pay tables available the casino for outcome of a throw of the Lucky Cat dice.

If these rules were confusing, perhaps this rack card will help. Click on it for a larger version. 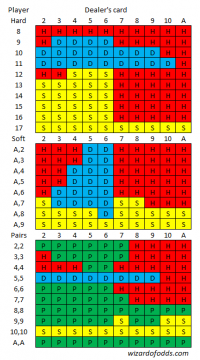 It should be noted the only differences compared to conventional blackjack are:

This basic strategy is for pay table 2. The only difference with pay table 1 is to stand on soft 19 against a 6, as opposed to doubling.

The following table shows the probability of 0 to 4 Lucky Cats per roll under Pay Table 1. The lower right cell shows an expected win of 0.964506 to 1. Compare to this the 1 to 1 win in conventional blackjack.

The following table shows the probability of 0 to 4 Lucky Cats per roll under Pay Table 2. The lower right cell shows an expected win of 0.810185.

All things considered, for the same set of blackjack rules, I show the effect on the expected return of the Lucky Cat rule on a dealer 22 to be as follows. A negative number means a lower return for the player, thus a higher house edge.

In Version 2, whenever the dealer busts on any total, three Lucky Cat dice are rolled. The version 2 dice have a white cat on one side, a gold cat on another, and the other four sides are blank. The win on a dealer bust is determined as follows:

The following table shows the probability of each possible outcome with the dice on a dealer 22.

I show that given the same blackjack rules, the effect of the version 2 rules is an increase in the house edge of 1.29%. At the Golden Nugget, I believe they use six decks and do not allow re-splitting aces, for an overall house edge of 1.94%.

Following is the basic strategy for version 2. Click on the image for a larger version. 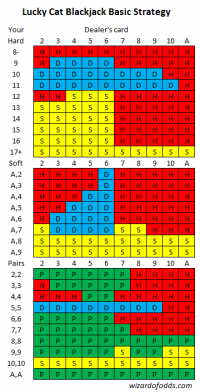 I would like to thank Geoff Hall for sharing the GLI math report, which I'm in agreement to within 0.03% on the house edge.

Lucky Cat Blackjack — Discussion in my forum at Wizard of Vegas.