Lightning Blackjack is a blackjack variant by Evolution Gaming, a provider of live dealer games for Internet casinos. It could be loosely described as a blackjack version of Ultimate X Poker, where a win in one hand earns a multiplier in the next hand. 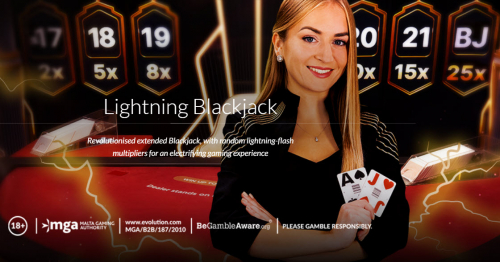 Lightning Blackjack is based on conventional blackjack, with the following specifics:

Following are the rules that pertain to the multiplier feature.

The following is a table of known multipliers, based on a sampling of 19 hands only. The game rules state a 25x multiplier is possible, but since it was not observed in my sampling, I am not including it.

Before considering the Lightning Fee or any multipliers, I get a house edge of 0.72%. This is 0.62% from my house edge calculator, putting in that the dealer peeks for blackjack. Then I add 0.10% from my effect of rule variations.

The web site Live Casino Comparer, which I like, quotes an overall return to player of 99.56%, based on the initial wager only. For example, if the player bet $100 on the main wager, with another $100 matching Lightning Fee, he could expect to get back $199.56.

The figure above is likely based on optimal strategy, which would reflect not just the player cards and dealer card, but also the current multiplier. Some initial analysis has shown a very unconventional strategy with a large multiplier, making such plays as doubling on 5 or 12 and splitting tens.

As of this writing (November 11, 2021) I have not worked out such a strategy yet. However, I have simulated the game using the appropriate basic strategy for the base game and the average multipliers shown above.

The next table shows the various pertinent win/loss outcomes per hand, the probability of each, units won and units lost (before considering the Lightning fee), the overall win after the average multiplier shown above and the product of the probability and the win. The lower right cell shows an overall win of 0.823675.

Disclaimer: I want to emphasize the above figures are based on conventional basic strategy, which is not appropriate for Lightning Blackjack. Evolution, the makers of the game, claim a house edge of 0.44%, based on the original wager. I do not dispute this and highly respect Evolution and trust the figure to be accurate. However, it is based on an unknown optimal strategy that, as far as I know, is known only to Evolution. I also want to emphasize my average multipliers are based on a very small sampling of 19 hands. It is very diffuclt for US players to play this game and I am limited to the hands shown in the YouTube video mentioned in the external links section below.

My bottom line is I would not play this game, at least for large bets, until a proper strategy is published. I may do so and I may not.