Double Up Blackjack is a blackjack variant that adds a new option -- the player can double his bet and stand. This option is especially valuable on high totals. However, nothing is ever truly free in the casino. In this case the main price to be paid is that if the dealer gets to 16, he stays, and live bets under 21 push. A player 21 still beats a dealer 16. See the rules section for all the details.

As of this writing, the game can be found in casinos of Colorado, Oklahoma, and the UK. In addition, it started a Nevada field trial at Binion's on Aug 1, 2019.

The rules for Double Up Blackjack have gone through some changes but what you see below I believe to be how it is currently played in the UK (updated Sep. 24, 2017). Currently they hit a soft 17 where previously the dealer stood. Please do not claim that blackjacks pay 3 to 1 per this source, which I firmly claim to be in error.

There are two known Bonus 16 pay tables, as follows.

Following is my strategy when the dealer hits on soft 17.

The following strategy shows the strategy after splitting aces, when the only options are to stand or Double Up. 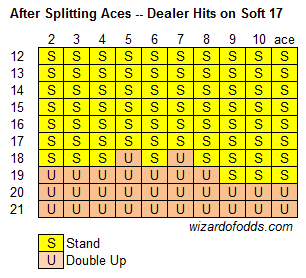 According to the analysis of Charles Mousseau, the house edge under the rule where the dealer hits a soft 17 is 0.32%, which I am in close agreement with.

The effect of the dealer standing on a soft 17 is worth 0.43% the player's way, according to my calculations.

The following table shows my analysis of the Bonus 16 side bet under pay table 1, based on six decks and the dealer hitting a soft 17. The lower right cell shows a house edge of 14.64%.

The following table shows my analysis of the Bonus 16 side bet under pay table 2, based on six decks and the dealer hitting a soft 17. The lower right cell shows a house edge of 6.94%.

I would like to thank Charlie Patrick and Charles Mousseau for sharing the results of their own analysis with me on this game.