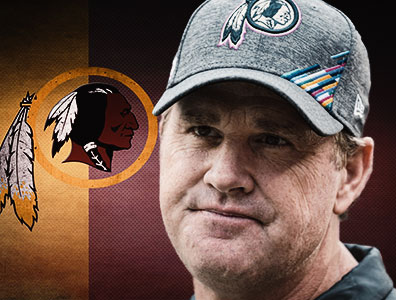 Previously to becoming the head coach of the Redskins, Gruden was the offensive coordinator of the Cincinnati Bengals from 2011 to 2013. Before that he was the head coach and general manager of the Florida Tuskers. For those of you that don’t know who the Florida Tuskers are, they a team in the UFL or United Football League which is a small American Professional football league that no one ever hears about.

Even though he had very little say in terms of building a team, making roster moves, as well as who to play when to play them and other various decisions a head coach usually makes for his football organization in the National Football League. The owner of the Redskins, Snyder, is an extremely hands on owner that likes to control every aspect of the team’s operations. Gruden went 35-49-1 as the team’s head coach which usually won’t cut it in the NFL especially after 6 seasons of disappointment.

Team’s Ranks While Coaching in the NFL

"Through the first five games of the 2019 season, the team has clearly not performed up to expectations, and we all share in that responsibility," says the Washington Redskins organization. "Moving forward we are committed to doing all that we can collectively as an organization to turn things around and give our Redskins fans and alumni a team they can be proud of in 2019 and beyond."

"To make a decision like this is difficult but it was necessary. Our 0-5 start is not just disappointing, we had much different expectations for this beginning of the season," the Redskins team president, Bruce Allen, explained. "We owe it to our fans, our millions of fans not just here in the great nation's capital but across the world, the players, the coaches and their families to do everything we can to win."

“This is a production-based business, and I didn’t get it done,” he added.

Allen said, “Under Bill’s leadership and the programs he’s going to put in and the discipline and execution, we believe we’re giving it the best opportunity to beat the Miami Dolphins and for the rest of the year.”

“I want to make sure that everybody knows that I actually did work,” Gruden stated.

“We’re all involved in this,” he remarked at one point. “I don’t ever want to hide from our record.”

“You know, I don’t necessarily agree with the premise that it’s never,” he explained.

“You know, the culture is actually damn good,” he stated.

“Because I am,” says Allen.