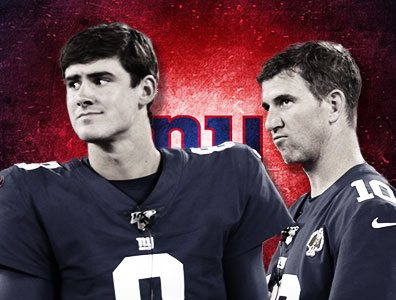 The New York Giants began the young 2019-2020 NFL season with a record of 0-2, and the Giants have decided to make a big change in hopes to turn the year around. They are benching their long-time veteran quarterback, Eli Manning, and they are starting their rookie QB, Daniel Jones.

Manning has been the face of the NY Giants franchise for the last 15 years or so, but over the course of the last few seasons he has been held responsible for the poor football play on the field for the team. As he is approaching the end of his NFL career, New York drafted a quarterback out of Duke University with the number 6 overall selection of the 2019 NFL draft. His name is Daniel Jones, and the Giants believe he is the future franchise QB.

The believe that Jones gives their team the best chance to win right now, and at the very least they can provide him with valuable NFL game action experience. Manning has overall been an average quarterback in the League, especially on paper statistically, even though he has had two Super Bowl wins with him earning the Super Bowl MVP honors in both of those seasons. This brings about the great football debate of whether or not Manning is a Hall of Fame NFL player or not.

Hall of Fame for Manning?

As a Hall of Fame player, he had amazing playoff runs and did what only 4 other players have ever done by winning the Super Bowl MVP Award two times. The other four players include all time great NFL quarterbacks such as Joe Montana, Terry Bradshaw, Tom Brady, and Bart Starr. I know he does not have an overall winning record, and he has missed the playoffs the majority of his years as the New York Giants starting quarterback. It makes for an interesting discussion, but most people who know sports well do believe that he will become a Pro Football Hall of Famer as a player.

"Eli and I spoke this morning," says New York Giants head coach, Pat Shurmur. "I told him that we are making a change and going with Daniel as the starter. I also talked to Daniel.

"Eli was obviously disappointed, as you would expect, but he said he would be what he has always been, a good teammate, and continue to prepare to help this team win games. Daniel understands the challenge at hand, and he will be ready to play on Sunday."

"Ultimately, this is a move that I felt was best for this team at this time," Shurmur stated. "I have said it since I got here, I am very fond of Eli. His work ethic, his preparation, his football intelligence. All those attributes are as good as I have ever seen in a player. And Eli worked as hard as you could ask of anybody to get ready for this season. This move is more about Daniel moving forward than about Eli."

"Hey, we're 0-2 and looking for answers," Manning explained. "I get it when you draft a guy early and [are] not winning games, things are going to come up. So I just need to keep working and do whatever my job is."

"We're always trying to do what we can to win this next game. And then we're always behind the scenes having those long-term discussions," says Shurmur. "I think that is the challenge each week is doing what you can to win each game. That's really my focus as the coach and certainly that is what the players' focus is."