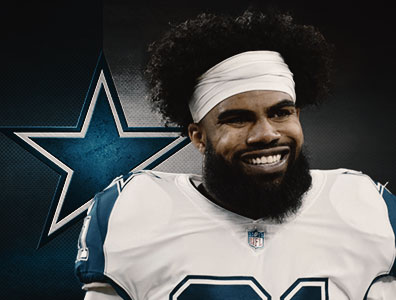 One of the biggest stories of the 2019 NFL offseason was the holdout of Ezekiel Elliott, the superstar running back for the Dallas Cowboys, who has established himself as one of the great offensive backs if not the best in the game at this time. Although he still had two years remaining of his rookie contract, he made the decision to use his leverage now in order to force the Cowboys to renegotiate his contractual agreement.

With the short-lived careers of running backs in the National Football League, he wanted to start getting paid like the top rusher and refused to participate in team activities or even play for the Dallas team until he got the deal, he felt he deserved. Keep in mind, the Cowboys are highly reliant upon his performance on the field, and they knew the success of their immediate future depended upon making sure he was happy and on the gridiron.

While the majority of players for the Dallas Cowboys were involved in training camp, meetings, practices, workouts, preseason games, and other various team activities in preparation for the vastly approaching 2019-2020 NFL season, Elliott was in Cabo San Lucas far away from the football organization in Texas. However, he was supposedly staying in shape and working out to remain in League condition. He was planning on staying in Mexico and preparing to miss regular season games until a contract extension making him one of the top-paid running backs was agreed upon.

When news broke earlier this week that Elliott was on a flight back from Cabo to Dallas, I was pretty sure that his agent and himself were close to finalizing a new deal with the Cowboys, and I was most certainly right. The following day, the team announced that they agreed on a contract extension with the Elliott, and that he would be joining the team the next day as they scramble to all get on the same page for their first football game this Sunday, September 7th, 2019.

Sources reported the new deal still fresh in wet ink was a 6-year $90 million extension that includes $50 million in guaranteed money. Below is a breakdown of Elliott’s previous as well as a new contract with the Dallas Cowboys.

"Because I believe I'm the best," Elliott proudly stated on Wednesday.

"The heat was a little rough today, but it's air conditioning in AT&T Stadium," he added in a joking manner. "So I mean, I'm just going to keep seeing how I feel the rest of this week."

"He's in very good shape," Cowboy’s head coach, Jason Garrett, explained. "He looks good, but he hasn't practiced with pro football players, so we'll just see how he fits back in. But he's a quick study. He's a smart guy, got excellent football IQ. So we'll just see where he is and adjust accordingly as we go."

"I think I'm just going to approach it as a normal week. You still have to be fresh by Sunday," Elliott goes on to say. "It is a long season. So don't want to try to overdo it and risk injury."

"You just try your best to gauge them and try to put the player, the team in the best position," says Garrett. "Obviously he was with us all throughout the offseason. He missed training camp. Really hasn't played in preseason games in the past, so there's a lot of different factors to weigh.

"The biggest thing you do, is you get him back in here and you get him back to work. You get feedback from him as to how he's doing. You watch him and you make your best judgment in how you want to use him going forward."

"Guys are just excited to see him. It was less about, like, 'Oh, thank God you're here. Thank God you got your deal done,'" Cowboy’s center Travis Frederick remarked. "It was, 'Man, I've missed you. I haven't seen you in a month.' It's just weird not having him around. ... It's like one of your brothers has shipped off to do a semester abroad and all of a sudden has come back. It's just a good, reuniting feeling."

"Calls, text ... I mean, one of my teammates told me don't come back without a deal," Elliott exclaimed. "I mean, just support like that from this group of guys meant everything. It definitely would have been harder if things were the opposite."

"It's just negotiations. You've got to get through it… We're good."

"I mean, I've just got to take it to the next level now," Elliott finished. "That's what I'm trying to say."