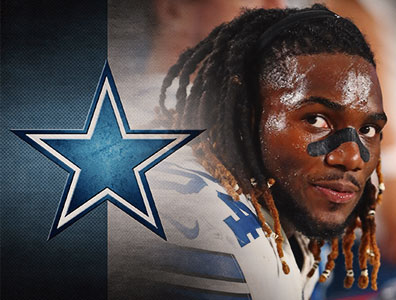 On Tuesday, August 20th, 2019 the Dallas Cowboys announced that they have come to an agreement with their young superstar linebacker, Jaylon Smith, on a five-year $64 million contract extension. The new deal includes $35.5 million in guaranteed money.

In the 2016 NFL draft, the Dallas Cowboys took a big risk by selecting Smith with their second round pick. While still playing for Notre Dame, the inside linebacker suffered a severe injury to his knee which had a significant amount of nerve damage associated with the damaged knee. Both the Cowboys as well as Smith were concerned that the medical condition of that knee may disarm the athletic ability of the once great defensive standout. The high risk high reward gamble paid off. The Cowboys got a great player in Smith who wants to play for the team for a long time to come.

The knee injury sidelined Smith for the entirety of his rookie season in the NFL with Dallas, but once healthy, the star linebacker from Notre Dame played in 32 consecutive games while starting on the Cowboy’s much improved defense for 22 games. Throughout the last two seasons with the Dallas team, Smith recorded 249 tackles. Last year he was the team’s second leading tackler, and he sacked the quarterback 4 times as well. The inside linebacker also pressured opposing quarterbacks 13 times, had 5 tackles for losses, 4 pass breakups, 2 forced fumbles, and 2 fumble recoveries.

In other words, he really earned his large new contract extension with all that guaranteed cash. In addition to all his on-the-field production, he was also a leader in the locker room which is rare for a young player on a veteran professional football team. Smith was admired by the Cowboys organization for his strong work ethic, high attention to detail, and his heavy participation in club meetings and practices. These characteristics are very much appreciated by NFL franchises, and these are the type of intangibles that reveal the true character of an individual player.

Other Front Office Priorities for the Cowboys

The team has three other players that are a high priority to get signed to new contract extensions. All of the three are high profile offensive skill position players. The first being their quarterback, Dak Prescott, who reportedly just turned down a contract extension valued at around $30 million per season. With other top quarterbacks such as Tom Brady and Russell Wilson getting their contracts restructured Dak is hoping for the same from the Dallas team.

The second of these offensive threats looking for a new deal is the Cowboy’s running back, Ezekiel Elliott. He is currently holding out from team activities while hanging out in Cabo until he gets the contract extension, he feels that he deserves.

The last of these three players is wide receiver, Amari Cooper, who helped turn around the team’s offense immediately once he was acquired from the Oakland Raiders a little while back. Jerry Jones and the Cowboy’s organization knows that these three assets are essential in their team’s success for the near future. These are all potential Hall of Fame players if they continue to develop at a high rate in the National Football League.

"Y'all have been badgering my ass to get a contract done for the last three weeks. This is a contract story," Dallas Cowboys owner and general manager, Jones expressed. "And this is a contract story that is not just this year or not just next year, this has it all. It has overcoming. It has talent. It has rewarding an ambition. Or it just has the beginning of what ambition will get you in the future. That's the biggest, most exciting thing about this."

"You took a risk, a $4.5 million risk, had I never been able to play again," Smith told both Cowboys executive, Stephen Jones as well as Jerry Jones, at the press conference. "So me understanding that, it was my duty for them to get the return on their investment. They've been able to do that. And now I'm fortunate enough to really be a Cowboy for life, [which] is what I want. I'm thankful to be here, for sure."

"It just takes getting in the ballpark, then usually these things roll," Stephen stated.

Jerry explained, "There's less pie, make no bones about it," in regards to signing Elliott, Prescott, and Cooper after Smith just signed his new deal.

"I wouldn't say (plenty of pie is left)," Stephen replied. "We've obviously got a feel, and we still do want to get Amari and Zeke and Dak signed. That's still huge for us. Very optimistic. I know they're no different than Jaylon. They want to be here. They want to be Cowboys. I still stand by we want to get them contracts that they're having their happy moment like (Smith) and it's still good for the team."

Jerry goes on to say, "Look, I've earned the right with Zeke to joke. Period. I've earned it."

"He has never complained," Jerry Jones explained. "He has never wavered, never missed a workout, and he's never quit. Not one time. He is admired by his teammates. He is admired by the people he competes against. His story is one that I would have done anything to be sure that it could be a Dallas Cowboys story."