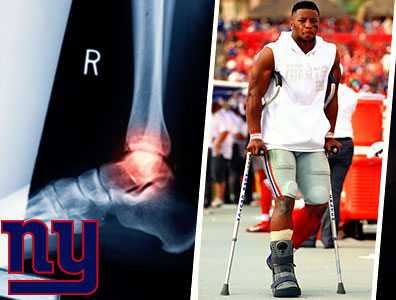 The superstar running back for the New York Giants, Saquon Barkley, suffered a severe ankle sprain in the Giants 32-31 win against the Tampa Bay Buccaneers. An MRI after the game disclosed that the injury was a high ankle sprain, and that Barkley will have to miss four to eight weeks in order to recover from this set back. It sounds like he will be sidelined closer to the 8 weeks than the four weeks to make things even worse for Saquon and New York.

With a week 11 bye week for the New York Giants, it is highly possible that Barkley could return in time to play in the last six games of the season for the Giants after an eight-week recovery period.

The New York “football” Giants will have to rely on several other players to fill in for arguably the best running back in the National Football League. Wayne Gallman is the next player up that will carry the majority of the load for the Giants ground game. They can also use their fullback Eli Penny as a converted tailback to help spread out some of the carries for NY.

Practice squad players, Jon Hilliman and Austin Walter, are rookie rushers that can be brought up to the active roster if they choose to as well. It will be extremely tough to fill the shoes of the Pro Bowl running back that won the NFL Rookie of the Year award just a season ago.

Timing of the Injury

The timing of this injury couldn’t be worse as the Giants had just made a serious decision to bench Eli Manning, and start their rookie quarterback, Daniel Jones, who they drafted with their first selection in the 2019 NFL draft.

In his first game with New York Jones had a great performance and led them to their first win of the season in the same game that Barkley injured his ankle. The Giants were looking forward to turning their year around moving forward, but losing Saquon will greatly diminish the chances of that happening. They have a tough road ahead of them with the recent success of teams in their division such as the Dallas Cowboys and the Philadelphia Eagles.

"We're just going to have to see first off. We certainly believe in Wayne Gallman and we certainly believe he will be able to step in and do his very best. And we'll just have to see at some point. We may have to add a running back behind him as we go forward here," New York Giants head coach, Pat Shurmu,r stated.

"It's like any injury. It's very unfortunate to have Saquon out of the lineup. We all know what he brings to the team. But it's going to fall on all of us to move forward and do what we can to win games," says Shurmur.

"I'm not out for the season," Barkley explained after the win last Sunday. "I'm going to do whatever I can to get back as quickly as possible. Not for myself, but for my team. That's what I continue to think about. I caught myself getting a little upset on the sideline just because I wasn't able to be out there with those guys."