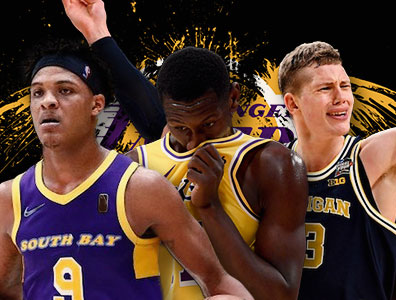 The Los Angeles Lakers have restructured their trade deal with the New Orleans Pelicans in order to properly accommodate the Anthony Davis Trade. The new deal brings the Washington Wizards in to the table.

The official free agency period begins at Sunday, June 30 at 6 p.m. ET. All trades are obviously not set in stone until the above date and the players involved pass physical examinations for their new basketball organizations as well. The whole NBA landscape will absolutely change starting on June 30th.

Sources report that Mo Wagner, Isaac Bonga and Jemerrio Jones will be sent to the Washington Wizards in order for the Lakers to dump off their contracts and free up the necessary cap space. The Lakers will send the Wizards a second-round pick in the 2022 NBA draft, and the Wizards will send the Pelicans cash in this new three team trade deal. The Pelicans will still receive Lonzo Ball, Josh Hart, and Brandon Ingram. This deal is planned to happen officially on July 6th, 2019.

Apparently, superstar big man, Davis is waving his $4 million trade bonus which will free up enough cap space to sign another free agent to a max deal, or the Lakers can pick up multiple role players with that money. This will turn the Lakers from a team that did not make the playoffs last season to a super-team contender to win the 2020 NBA Finals. If they do not choose to sign more players to improve their roster the money will be redistributed amongst certain players such as Davis and James.

Kawhi Leonard to the LA Lakers

Sources are reporting that Kawhi Leonard will meet with the Los Angeles team this week to possibly sign him to the team in free agency. Leonard just won an NBA championship with the Toronto Raptors and he was named the MVP of the 2019 NBA Finals. The superstar forward who can score and play shut down defense is originally from Southern California, and he is interested in possibly playing for either the Lakers or the Clippers.

I really hope that Leonard does not join Lebron James and Anthony Davis in LA as that would be such an unfair advantage over other teams in the league. These super teams with three or more superstars are getting to be old. It is not much of a competitive NBA landscape as only several teams have a chance of winning a championship. It makes for only a few really good basketball teams and a lot of really bad ones.