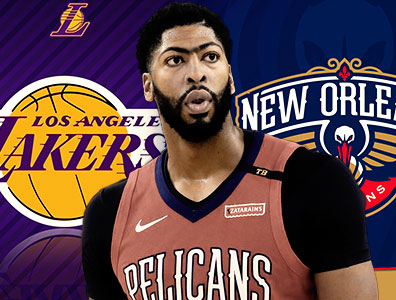 Sources report that the Los Angeles Lakers and the New Orleans Pelicans agreed on a blockbuster NBA trade. This trade will be signed and become official on Saturday, July 6th, 2019 when the NBA free agency period begins. All of the players involved in the trade will need to pass a physical examination as that is the industry standard.

The Lakers will acquire the three time All NBA superstar, Anthony Davis, while the New Orleans Pelicans will receive Lonzo Ball, Brandon Ingram, and Josh Hart along with the Laker’s 4th overall draft pick in the upcoming 2019 NBA draft. This year’s draft is on Thursday, June 20th, 2019 in the evening. It is worth mentioning that the New Orleans Pelicans already have the first overall draft pick that they won in the NBA draft lottery that was held several weeks ago.

Unanimously people agree that the Pelicans will select the power forward prodigy, Zion Williamson out of Duke University with the first overall draft pick on Thursday, June 20th, 2019. Sports Illustrated and ESPN are projecting New Orleans drafting Jarrett Culver who is a sophomore shooting guard from Texas Tech University. Texas Tech was the runner up in the 2019 NCAA March Madness Tournament as they lost to the national champion Virginia Cavaliers.

With the Lakers getting the big time player with the unibrow, Davis, they should be better equipped to compete with the other powerhouse teams in the Western Conference. Teams such as the Western Conference champion Golden State Warriors, Houston Rockets, Los Angeles Clippers, Denver Nuggets, Portland Trail Blazers, and others.

LeBron James obviously did not feel that he had enough help on his team to lead them deep into the playoffs and possibly win an NBA championship. The coaching changes the Lakers made should be good for them as well. They hired new head coach, Frank Vogel, as well as Jason Kidd as the top assist coach. That is basically like having two qualified head coaches. It is too bad Magic Johnson is still not the President of basketball operations as I know he would have liked to win a championship with LeBron and Davis.