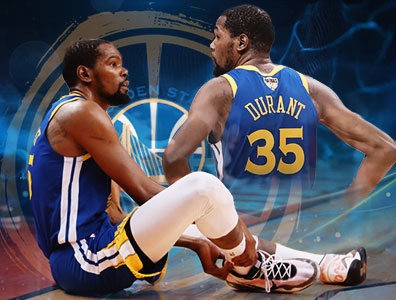 On Wednesday May 8th, 2019, the Golden State Warriors all-star forward, Kevin Durant, suffered a serious right calf strain in game 5 against the Houston Rockets. This injury had sidelined him from playing for over a month. In fact, he probably would have not played again this season unless his team really needed him as he is regarded as the best basketball player in the world right now.

With the Warriors facing elimination and one game away from losing the 2019 NBA Finals, Durant decided to play in game 5 against the Toronto Raptors on Monday, June 10th, 2019. This was after doctors had cleared him ready for game action. The superstar small forward had received a lot of pressure to participate from various sources such as teammates, fans, the Golden State Warriors organization, and the media.

Durant looked great on the court early on in that game 5 from the Scotiabank Arena in Toronto, Ontario. He went 3 for 3 from 3 point range and had 11 total points in 12 minutes as well as 2 rebounds and one blocked shot.

Everything was looking up for the 2 time NBA Finals MVP and the Warriors until he went down after planting his right foot while making a move with the ball in the second quarter of the game. He ended up rupturing his right Achilles tendon during that play. The Warriors ended up winning game 5 106-105 forcing a game 6 to be played in Oakland. 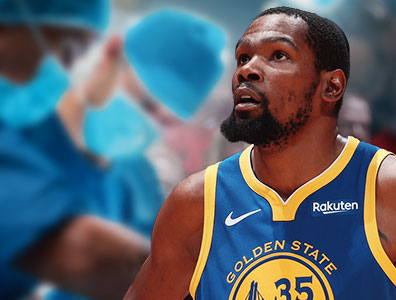 After game 5 Kevin Durant underwent MRI scans and eventually flew to New York to receive treatment for his latest injury. A surgical procedure was performed on Kevin to repair the right Achilles tendon. This surgery occurred on Wednesday, June 12th, 2019 at the Hospital for Special Surgery in New York. Dr. Martin O'Malley was the surgeon that operated on the Warriors superstar forward.

Now that the 10-time NBA All Star had the operation, he will have to wait for it to heal, and then begin a very rigorous rehabilitation regiment. Hopefully Durant will only miss next year as he recovers from the injury and he will return to the same caliber player that he once was. This is really a shame for him as he was about to enter free agency and get a new contract worth around $200 million.

“What's good everybody I wanted to update you all: I did rupture my Achilles. Surgery was today and it was a success, EASY MONEY My road back starts now! I got my family and my loved ones by my side and we truly appreciate all the messages and support people have sent our way. Like I said Monday, I'm hurting deeply, but I'm OK. Basketball is my biggest love and I wanted to be out there that night because that's what I do. I wanted to help my teammates on our quest for the three peat. It’s just the way things go in this game and I'm proud that I gave it all I physically could, and I'm proud my brothers got the W. It's going to be a journey, but I'm built for this. I'm a hooper I know my brothers can get this Game 6, and I will be cheering with dub nation while they do it.”

Warrior’s Head Coach Steve Kerr had this to say…

"…I completely understand the world we live in," says Kerr. "As [Warriors general manager] Bob [Myers] mentioned the other night, there's going to be blame. There's going to be finger-pointing, and we understand that. And we accept that. This is kind of what you sign up for when you get into coaching, general management in the NBA. There's all kinds of coverage, judgment, criticism, and it's all part of it, so we accept that. The main thing is our concern for Kevin and these last couple of days just checking on him. Obviously, everybody feels horrible for what happened.

"As Bob mentioned the other night, this last month was a cumulative, collaborative, effort in his rehabilitation. And that collaboration included Kevin and his business partner Rich Kleiman, our medical staff, his own outside opinion, second opinion, doctor outside of our organization. Kevin checked all the boxes, and he was cleared to play by everybody involved."

"Now, would we go back and do it over again? Damn right," says Kerr. "But that's easy to say after the results. When we gathered all the information, our feeling was the worst thing that could happen would be a reinjury of the calf. That was the advice and the information that we had. At that point, once Kevin was cleared to play, he was comfortable with that, we were comfortable with that. So the Achilles came as a complete shock.

"So it's devastating, mostly for Kevin, obviously," added Kerr. "But I feel horribly for Rick Celebrini, as well, who is one of the best people I've ever been around and one of the smartest, brightest minds that I've ever been around. He's devastated. Bob, the team, we all are. But we made the decision collaboratively with all the information that we had and we thought it was the right one."