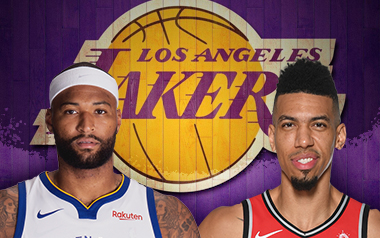 The Los Angeles Lakers have made a couple of big time moves to help add to their already star filled roster. Even with the acquisition of LeBron James last year, it was obvious that their team did not have enough talent and veteran presence to contend with the very strong Western Conference of the NBA.

During the 2019 NBA offseason, the Lakers have made several small moves to tighten up their line up. They resigned shooting guard Kentavious Caldwell-Pope. He reportedly received a two year $8.2 million contract that included a player option. Los Angeles also resigned center JaVale McGee as well. His deal is a two year $16 million agreement. These are the small pieces to the puzzle that LA is hoping will help support the stars they keep bringing aboard.

The Lakers realized that they needed to pick up some other big name players to fill out their roster once Kawhi Leonard turned them down to join the LA Clippers with Paul George. They had the money for Leonard so they decided to use it on several players as opposed to just one baller.

They picked up veteran free agent guard, Danny Green, who had just won the NBA Finals with the Toronto Raptors. The Lakers signed him to a two year deal worth $30 million. Green will provide his new team with solid shooting especially from three point range. He is also a very good defender as well and will fit in as a top notch role player for this new look Lakers squad.

The other big name player they chose to pursue was DeMarcus Cousins. Los Angeles signed him to a one year $3.5 million contract. This will reunite Boogie Cousins with superstar big man Anthony Davis who was his teammate with the New Orleans Pelicans. Cousins, Davis, McGee, and LeBron James will be a tough group of guys to score against down low. They all play superior defense and can rebound the ball efficiently as well as block a lot of shots.

One thing to keep in mind about Cousins is his health. He has suffered an Achilles tear which side lined him for a year in the past. It is yet to be seen how well he recovered from that set back as he tore his quadricep in the 2019 NBA playoffs shortly after his return from the Achilles injury. It will be interesting to see how dominant a force he can still be in today’s game.

"That's part of the reason why we wanted to become teammates again," says Cousins. "We realized how much better we made one another and how much we made the game easier for each other. We both appreciate each other's presence.

"To add LeBron James to the mix, his résumé speaks for itself. One of the greatest players ever to play the game, added to that, it should be an exciting season."

"The roster is incredible," Cousins explained. "I think we got a lot of talented pieces on paper. On paper we look legit, we look like we have a great chance of competing for a title. It's obvious that the game isn't played on paper. It's our job to come together and mesh and get on the same page and build a chemistry and go out and win games. As far as on paper, we look great."

"Actually, the game that I tore my quad ... that day [I was] saying how amazing I felt," exclaimed Cousins. "I really started feeling like myself again, and some unfortunate things ended up happening that night. I was really feeling good at the time. That is kind of a good thing because I know it's possible to get back to that place. That is the positive I took out of it."

"I'm working my tail off every single day," says Cousins regarding his health. "My quad is 100 percent healed. I'm building it up every day and building up my lower body every single day, and I'm getting stronger, getting in better shape. My plan is to come into training camp in tip-top shape. My goal is to play 82 games this season. I want a full season of health and going to the playoffs, and whatever happens happens."

"I've kind of been doubted my whole life, and I use that as fuel to continue to push every single day," Cousins stated. "One of my biggest fears is to be proven wrong by somebody that doesn't agree with me or doesn't have my best interest in heart.

"So, with that being said, I'm always seeking to prove those type of people wrong."