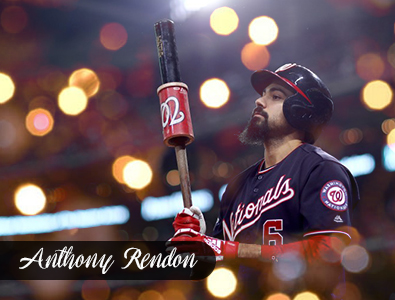 Anthony Rendon just won the World Series with the Washington Nationals, and heading into the MLB offseason, he was the most sought-after position player free agent on the market. This superstar third baseman was looking to get paid long term. The only problem for the team hailing from our nation’s capital is that they just shelled out $245,000,000 for Stephen Strasburg’s 7-year deal earlier this week.

They would have loved to retain Rendon, but they simply just could not afford it. In fact, Washington offered him a 7-year deal for somewhere between $210,000,000 and $215,000,000 last fall, and Anthony turned it down to test the waters of free agency in hopes of more money.

The Angels made it clear that they were looking to spend big money this offseason in order to build up their roster for their newly acquired manager, Joe Maddon. They attempted to lure the hometown So Cal guy in starting pitcher Gerrit Cole, but he took an astronomical deal with the New York Yankees (9 year / $324,000,000). So, Rendon was the next best option, and in my opinion a much better deal economically. I know the Washington Nationals will miss him in their line up on a daily basis.

Now with the addition of Rendon, the Angels have a scary line up for opposing teams to have to pitch against. They have the best player in all of Major League Baseball in Mike Trout, and although Albert Pujols is at the tail end of his career he can still rake. Shohei Ohtani is an amazing Japanese player that can both hit for power as well as pitch a great game.

It should be interesting to see how the Los Angeles Angels will stack up in the American League now especially with the leadership and guidance of their manager Joe Maddon. He has taking the Tampa Bay Rays low payroll team to a World Series as well as winning the World Series with the Chicago Cubs. The Cubs had not won the World Series since 1908 until Maddon got them to the promise land in 2016.

“There are a number of teams that we’re talking with about Anthony and negotiations are current and active,” Rendon’s agent Scott Boras said. “There’s been numerous offers made by many teams and Anthony’s just kind of evaluating it. We’re in the process of going back and forth with a lot of clubs.”

"We're not going to stop until we get a definitive decision from Anthony," Mike Rizzo explained last summer. "It's all about getting to the right terms and the right numbers. He's near and dear to my heart...and there's a deal to be had if both parties can come to an agreement."

"If [an extension] happens, it happens, if it doesn't it doesn't," Rendon expressed before making his decision.

"When we see opportunities we usually jump on them and take them," Rizzo clarified."We're aggressive by nature. I don't think it changes us a whole lot."

"We're within some structure of a budget and a payroll forecast that you relatively want to be near, and then we just take those opportunities to Arte and see if he'll grant us the permission to do those things,'' the Los Angeles Angels general manager Billy Eppler stated just prior to the Rendon signing. "There's good players out there, and players that warrant some sizable contracts. I know the players that he likes."

“We’ve had conversations about Anthony throughout the process,” Washington Nationals general manager Mike Rizzo replied to the press.

“I don’t get my daily update from Scott [Boras], but I don’t sense anything is imminent at this point, but that was a while ago, so you never know.”

“We might not necessarily complete another deal in the next day or so, but we feel that we’re in position to improve our roster in a rather quick manner after the Meetings.”

"If Anthony Rendon and Scott Boras don't know that we respect him by now," Rizzo exclaimed, "then they'll never know."