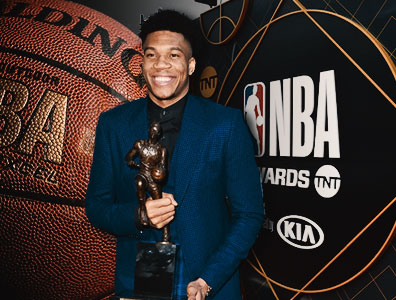 The 2019 NBA Awards show took place in Los Angeles, California on Monday, June 24th, 2019. The awards show was hosted by NBA legend Shaquille O’Neal. The television broadcast aired on TNT. Below is the complete list of all the major awards.

WINNER - Giannis Antetokounmpo, Milwaukee Bucks. Antetokounmpo is the second player from the Milwaukee Bucks to win this award as Kareem Abdul-Jabbar won it three times. Over the last 40 NBA seasons Giannis is the third youngest player to win the MVP behind Derrick Rose and LeBron James. In the lottery era, he tied Steve Nash for the lowest drafted MVP as he was the 15th overall draft pick.

Rookie of the Year

WINNER - Luka Dončić, Dallas Mavericks. Dončić is the only player from the Dallas Mavericks to win the rookie of the year award besides Jason Kidd. He is the fifth rookie to average 20 plus points per game, 5 plus rebounds per game, and 5 plus assists to achieve those marks. All of the other 4 rookies to do that also won the rookie of the year award at the end of their first NBA season.

WINNER - Lou Williams, LA Clippers. Williams has won the NBA sixth man of the year award three times. Jamal Crawford won the honor three times as well. Kevin McHale and Detlef Schrempf are the only other NBA players to win this award in consecutive seasons.

Defensive Player of the Year

WINNER - Rudy Gobert, Utah Jazz. Gobert is the first player to win this award in consecutive seasons since Kawhi Leonard did it in the 2014 – 2015 and 2015 – 2016 NBA seasons. If Gobert wins the award after the next NBA season he will be the first player to win the defensive player of the year award in three consecutive seasons since Dwight Howard did it from 2008 – 2011.

WINNER - Pascal Siakam, Toronto Raptors. Siakam increased his points per game average by 9.7 points throughout the 2018 – 2019 season. He held opposing players to 39.4 shooting percentage which is great for a big man, and it makes him the closest defender from the 2018 – 2019 NBA season who faced at least 500 shots. He is the first player from the Toronto Raptors to win this honor at the awards show.

Coach of the Year

FAN-VOTED AWARD - House of Highlights Moment of the Year: