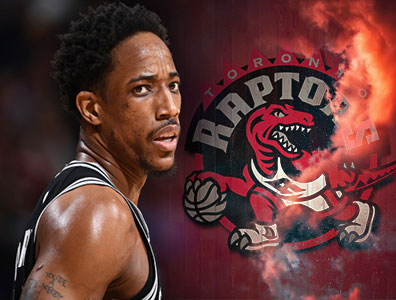 DeMar DeRozan was selected 9th overall by the Toronto Raptors in the 2009 NBA draft. He spent the entirety of his NBA career with the only remaining team out of Canada until he was traded to San Antonio prior to the 2018-2019 season.

The all star shooting guard was a part of one of the biggest moves in the NBA last offseason. On July 18th, 2018, the Raptors sent him along with Jakob Pöltl and a protected 2019 first round draft pick to the San Antonio Spurs for Kawhi Leonard and Danny Green.

Although the team north of the border was successful throughout the last several years, those seasons were often defined by great records, but early playoff exits. The Raptors knew they needed to make a change as they were only a superstar player away from making a deep run in the post season and contending for an NBA. That much-needed change was the above mentioned trade as Toronto is now competing with the Golden State Warriors in the NBA Finals.

DeRozan feels as if he is the sacrificial lamb. He did so much for the franchise throughout the first nine years of his NBA career only to be dealt away for the last piece of the puzzle in the all star forward Kawhi Leonard. I know that may hurt his feelings, but he must understand that this is a business move and is nothing personal.

"Honestly, I don't think I even said this -- I probably said it to my own inner circle -- but if it wasn't for all the years and groundwork that I did before then, none of them things would've been possible," DeRozan explains in a video interview to Bleacher Report. "Yes, I fought, I sacrificed, I pushed the limits to where I had to be the sacrificial lamb.”

"You just have to sit back and understand, like, you know, you are the reason so many things was even possible."

"To their credit, [the Raptors] probably felt like it was time to see what we could get to make that next jump."

"So for that to be gone like that, when you least expect it, it just throws you off guard. You know, we human at the end of the day, and it definitely hits you."

"I'm rooting for my best friend to do well, to accomplish something that we tried to do all the years, and he has the opportunity to do it. All the guys on that team, they know I'm rooting for them," he concluded.