Sette e Mezzo is Italian for seven and a half and also the name of a game of chance popular in Italy. It is closely related to the Spanish equivalent siete y media. The object is to get more points points than the dealer, without going over 7.5.

There seem to be many variation of Sette y Mezzo, but I believe the rules below to be common to all of them.

Lottomatica is the government entity that runs the Italian "lottery." There, a 5-5 tie is a push and the highest ranking hand is 7.5 points. In other words, a two-card 7.5 including the wild card would push against any other 7.5-point hand and pay even money.

The following table shows the basic strategy. Note the blue cells are where a hit is forced. This strategy is appropriate for both the Playtech and Lottomatica variants. 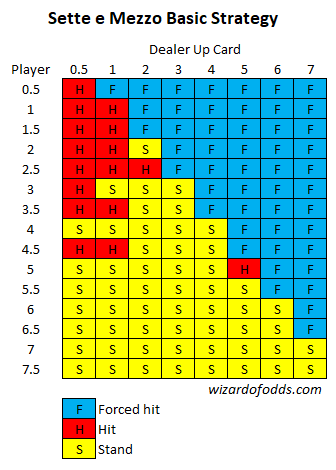 The following table shows probability of all significant events, based on a simulation of over three billion games.

The following return table summarizes the probability of all different win and loss amounts, for any reason. The lower right cell shows a house edge of 0.75%.

The following table shows probability of all significant events, based on a simulation of over 12 billion games under the Lottomatica rules.

The following return table summarizes the probability of all different win and loss amounts, for any reason, under the Lottomatica rules. The lower right cell shows a house edge of 0.28%.

It should be noted that Lottomatica claims a return of 99.8247% for this game, which equates to a house edge of 0.1753%. I think the cause of the disparity may be that they are assuming perfect composition-dependent strategy, while my strategy is total-dependent. In particular, my strategy says to always hit 5 vs. 5, but this is a very borderline play, which depends on the exact composition of cards in the players hand (like 16 vs. 10 in blackjack). Using composition-dependent strategy would certainly reduce the house edge by rough our difference, in my professional opinion.

The following table shows my analysis of Playtech's Parita Perfetta (perfect pair) side bet. The lower right cell shows a house edge of 3.85%.

The following table shows my analysis of Playtech's Mano di Poker (poker hand) side bet. It is based on the first two player cards and the dealer's up card. If the player stands on one card, then this wager is an automatic loser. The lower right cell shows a house edge of 3.68%, assuming the player always takes a second card. Please note that straights are 1-2-3 up to 5-6-7 and J-C-K. 6-7-J and 7-J-C are not straights.

I highly recommend avoiding this side bet, because it forces the player to make bad strategy decisions, for example a player one-card 7 vs. dealer 6.