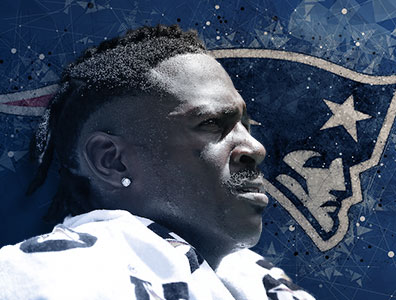 It has been an interesting and very troubling past year for the superstar wide receiver, Antonio Brown. He has been on three different teams that have all had to part ways with the controversial pass catcher.

The issues with Brown began at the beginning of the 2019 NFL offseason when the perennial pro bowler demanded a trade from the Pittsburgh Steelers. The trade came after the star receiver publicly bad mouthed many players, coaches, and executives of the Steelers. He was traded to the Oakland Raiders and received an extremely generous contract from them for a lot of money in which a large portion of it was guaranteed.

Brown’s stay in Oakland was short lived as there was one problem after another with him. The Oakland Raiders first had to deal with him missing team activities and football practices after his feet were badly frostbitten during a mishap in France involving a cryotherapy chamber. Then Antonio refused to play without his helmet that he has used in the past and that the NFL has outlawed due to safety precautions.

Just prior to the start of the 2019-2020 NFL season the Oakland Raiders decided to release Brow and within a matter of minutes the news broke that the New England Patriots were signing him to a one year contract. Brown was a Patriot for less than two weeks as he only played in one game before New England released him after multiple sexual assault and/or sexual misconduct allegations from different women surfaced against him.

"We appreciate the hard work of many people over the past 11 days, but we feel that it is best to move in a different direction at this time," the New England Patriots said in a statement released by the organization.

"The NFL and the Patriots clearly took our client's concerns seriously," says lawyers Lisa Banks and Debra Katz of Katz, Marshall, and Banks. "She wanted the threats and intimidation to stop and we hope that will be the case. The NFL has assured us that regardless of Antonio Brown's roster status, it will continue to investigate all claims regarding his behavior.

"We are gratified that the NFL recognized that it has an important role to play in policing player conduct that is sexually harassing and threatening."

"It's unfortunate things didn't work out with the Patriots," Brown’s agent, Drew Rosenhaus, stated. "But Antonio is healthy and is looking forward to his next opportunity in the NFL. He wants to play the game he loves and he hopes to play for another team soon."