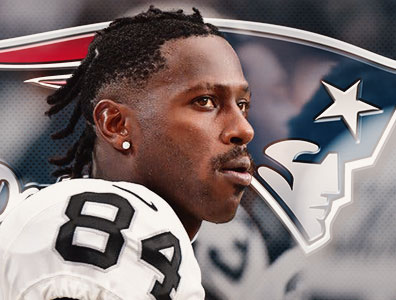 On Saturday, September 7th, 2019 the superstar wide receiver, Antonio “Mr. Big Chest” Brown made breaking news in two regards. First the Oakland Raiders released him from their organization, and then within a matter of minutes it was announced that he agreed to terms to sign a one year deal to join the New England Patriots organization.

During the 2019 NFL offseason, Brown demanded a trade to free himself from playing with the Pittsburgh Steelers after a number of outrageous events transpired there over the course of the 2018-2019 NFL season. Complying with his wish the Steelers front office worked out a deal to send him to the Oakland Raiders.

Back on March 13th, 2019 the Raiders introduced AB as the newest member of their team. They traded a third and a fifth round draft pick to acquire the controversial yet highly productive wide out as well as gave him a 3 year $30.125 million contract extension with a whole lot of guaranteed money involved.

Issues On and Off the Field

The entire duration of his stay in Northern California with Raiders was riddled with on and off the field issues. He had issues with his feet being frostbitten after a cryochamber mishap with him not wearing the proper footwear for that treatment in France.

Then was the never ending saga corresponding with him refusing to play with a helmet that was approved by the National Football League. Both of which kept him off the field and out of action throughout the Raiders training camp in Alameda, California and the majority of preseason team activities.

After those issue were exhausted and put to rest, Antonio Brown proceeded to get into an altercation with the Raider’s general manager, Mike Mayock, regarding fines passed on to the star receiver from the organization. This seemed to be the last straw with Brown and the Oakland team as they released him shortly after all his offseason troubles.

In a matter of an hour or two after that news broke it was announced that his agent, Drew Rosenhaus, and Brown had agreed to terms with the New England Patriots. This new contract with New England was reported to be a one year deal worth up to $15 million including a $9 million signing bonus, $10 million in guaranteed money as well as $5 million in various incentives. Brown is excited to work with Tom Brady and the Patriots, and hopefully he behaves himself this time around.

"Technically, it was really more of a warning," Brown’s agent, Drew Rosenhaus, explained about the situation with Brown and the Raiders. "If there were any infractions down the line, the Raiders would protect themselves. But never actually went as far as to void the guarantees."

"I tell you, he's a good guy," says the head coach of the Raiders, John Gruden. "He's misunderstood by a lot of people. He's a good guy. He's a great player, and I hope he gets what he's looking for."

"It will be fun," says Patriots wide receiver, Julian Edelman. "He's an explosive player, and we're happy to have him. The more playmakers you have out there, the better things can go."

"For me, initially, it was a culture shock. It was definitely different," says new teammate, Josh Gordon. "I think as I grew in this environment, and got to observe other young men move and organize and act professionally, and expectations were high. ... I knew, 'This is the way it's done here,' and I could either get with it or look for a transition somewhere else. It's tough, but if this is what you want to do, I think this is the best place to be.

"Antonio is going to have to figure out his way, just like everybody else has."

"I'll just tell you that the Patriots are obviously a very solid, strong organization," says Rosenhaus. "They do things the Patriots Way. They expect everyone to be accountable. They don't make any exceptions. I've discussed this with Antonio. And he wants to be a Patriot. He's prepared to go there, fit in, work hard, be like every other player on the team, do what's asked of him, do his job and make it work. He's honored with the opportunity and he's looking forward to taking advantage of it."

"Antonio had a robust free-agent market and certainly had a lot of options," Rosenhaus explained. "But it was hard to compete with New England and that amazing opportunity, that great franchise, and play with one of the all-time greats, Tom Brady, and Bill Belichick."

"You know there are trades that don't pan out. Relationships sometimes get off to a bad start and never recover. Unfortunately, this one just didn't work. I don't want the Raiders to get any flak for this because I just think it was a combination of bad luck and just bad circumstances.

"A lot of people focus on the last couple of months of dysfunction and things with Antonio. But what people should remember is that for eight years, he was one of the most rock-solid players in the league -- on and off the field. I just don't want people to lose track of that."

"He wants to win a Super Bowl," Rosenhaus stated. "It's a great opportunity for him to sign with a team that has dominated the football league for the past decade. It's a dynasty. The future is now for Antonio. This is an opportunity for him to do something that he hasn't been able to do in his illustrious career, which is win a championship. That's what he's looking forward to. That's immediately the goal. That's all he's thinking about right now."