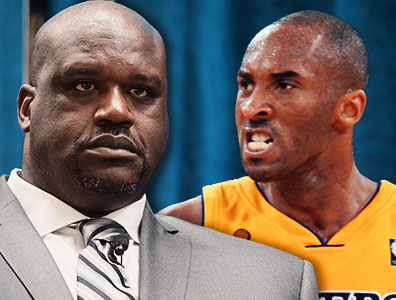 Kobe Bryant and Shaquille O’Neal, also known as the dynamic duo of Kobe and Shaq, haven’t played together since the 2003-2004 NBA season, but they have recently brought back old memories by the two exchanging words with each other and like old times not in a very nice way either.

Bryant and O’Neal were both considered to still be in their primes in 2004 when Shaq was traded from the Los Angeles Lakers to the Miami Heat. This move came after the two superstar players won three NBA Finals championships together (2000, 2001, 2002).

Both of them had very big egos, and they often butted heads while sharing the court in Los Angeles with the Lakers. O’Neal thought Bryant was too selfish with the ball and that he took to many shots, while Bryant thought Shaq didn’t have a strong enough work ethic and he lacked competitive spirit while playing basketball.

After they parted ways in the NBA both won additional championships. Bryant won the NBA Finals in 2009 and 2010 with a new look Los Angeles team that was very good but not as dominant as the Laker team when Shaq was there. O’Neal won the NBA Finals with Dwayne Wade and the Miami Heat in 2006. Both are all-time great NBA players and are legendary for what they were able to accomplish both together as well as individually.

Heated Media Statements Between the Players

"U woulda had twelve if you passed the ball more especially in the finals against the pistons #facts," O'Neal replied.

O'Neal goes on to say: "You don't get statues by not working hard"

Kobe Tweeted: “There is no beef with @SHAQ I know most media want to see it but it ain’t gonna happen. Ain’t nothin but love there and we too old to beef anyway #3peat”

Shaq Tweeted back: “It’s all good bro, when I saw the interview, I thought you were talking about Dwite, is that how u spell his name lol”

Overall these two Hall of Fame caliber NBA players have created a historic and legendary feud that seems to be timeless. The two do both generally feed off of each other. To truly appreciate their outstanding achievements, take a look at the career statistics listed below.