Ronald Acuna Jr. Tears ACL: Out the Remainder of the 2021 Season 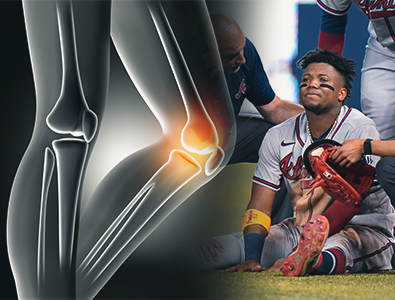 Ronald ended up landing very awkwardly on his right leg following a play on the right filed warning track as he attempted to catch a line – drive ball put in play by the Miami Marlins’ Jazz Chisholm Jr. during the 5th inning of the Atlanta Braves’ victory over the Miami Marlins last Saturday night. Acuna Jr. slammed into the outfield wall in right field of Loan Depot Park located in Miami, Florida as he tried to make one of his signature amazing defensive web – gems, but during this heroic effort he crumbled to the ground of the warning track as he grabbed his right knee in pain immediately.

Acuna Jr. struggled to leave the game on his own two feet following this tragic play in which Chisholm Jr. of the Miami Marlins scored an in the park home run as Ronald fell to the ground as he suffered a bad as well as an extremely painful injury to his right knee. The medical staff at the ball park called for him to be carted off the playing field in order to receive immediate medical attention.

Following his test results the Atlanta Braves determined and announced that Ronald tore his right ACL, and the 23 year – old superstar will require surgery to repair his torn ACL. Acuna Jr. was instantaneously placed on the 60 – day injured list and he be forced to miss the remainder of the 2021 Major League Baseball season. The Atlanta Braves do expect him to make a full recovery, and he should be back in game action during the regular season of big – league ball next year assuming there are no major setbacks in his recovery. 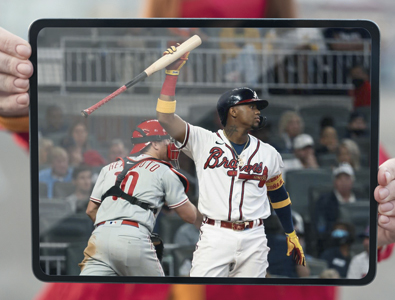 "The only thing I can say is that I'm obviously going to put maximum effort to come back stronger than ever," Acuna JR. expressed through the Atlanta Braves’ interpreter, Franco Garcia, on a Zoom call on Sunday, July 11th, 2021. “If was giving 500 percent before, I'm about to start giving 1,000 percent. I knew something was wrong," Acuna said. "I guess I didn't understand the severity of it, until the doctor told me about it later on. Nothing I can do about it now. I can't control things I can't control."

"I think I'm a patient person and I think that's going to work in my favor," Acuna said. "Continue to work hard, trust the process of the rehab. Just continue to work hard. You get out what you put in. (Being selected) means a lot to me," Acuna Jr. goes on to say. "In that same sense, those fans who went out and voted for me, they deserve it as much as I did. I wouldn't be here without them."

"When I got the news (about the ACL), I was really sad. I love to play and that's what I want to do, to be able to play. I'm really sad and disappointed for the team. I know they need me and I want to be there for them, to help contribute. I have the utmost confidence in my teammates to go out and produce, and I know they'll do great," Acuna Jr. explained.

According to Bovada sportsbook below are the odds to win the MLB 2021 World Series as of Wednesday, July 14th, 2021. Currently the Atlanta Braves have the overall 13th highest odds to win it all for this exciting 162 game regular season of Major League Baseball in addition to the 2021 MLB playoffs.