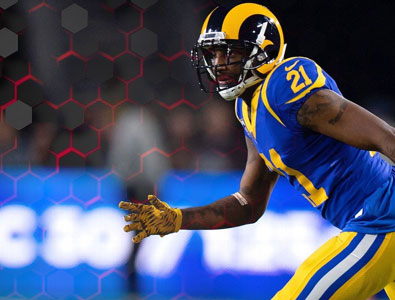 Along with Talib, the Rams sent the Dolphins a fifth round draft pick. The Miami team sent the Rams a seventh round selection in the 2022 NFL draft. Essentially this move was a way for the Dolphins to buy a draft pick, and it enables the Rams to clear salary cap space.

The Dolphins are winless so far about halfway through the 2019 – 2020 NFL season. They are clearly tanking to collect future draft picks in hope that they can build a winning football team in Miami for the future. Currently through the use of trading high their higher value players away they have been able to collect excellent draft picks for the next couple NFL drafts.

The LA team made this move to clear space in the salary cap as Aqib Talib is currently on the injured reserve list. Talib has a remaining $4.2 million left on his current NFL contract which is now the responsibility of the Dolphins.

Talib has been dealing with a rib injury since week 5 of the 2019 – 2020 NFL season, and he has the possibility of returning to game action by week 15 of this year’s NFL schedule. He will become an unrestricted free agent at the end of this season so no one knows where he will suit up for the 2020 – 2021 NFL season.

Talib’s Success in the NFL

Aqib Talib is a five time Pro Bowler in the NFL. He has a total of 35 interceptions since his rookie year in 2008, and 10 of those interceptions were returned for defensive touchdowns. Among active players in the National Football League he is tied for first in picks, and he is fourth all time in interceptions returned for touchdowns. Talib has played for the Tampa Bay Buccaneers, the New England Patriots, the Denver Broncos, the Rams, and as of now the Miami Dolphins.

He was a Super Bowl 50 champion, and was named to the NFL’s First Team All Pro in 2016. In 2013 he was selected to the NFL’s Second Team All Pro. Right now, Talib is 33 years old, and he is still considered one of the best cornerbacks in the National Football League.

"We're getting calls, like every team, and then there's teams calling us too, trying to unload players as well," says the Miami Dolphins general manager, Chris Grier. "We might be [a buyer], yeah. There's some things that might tempt us. We've had some conversations with teams."

"Everything we do, we do in the best interest of the team, long term and short term," the Los Angeles Rams head coach Sean McVay explained. "... Nothing but a lot of great things from our end on Aqib and what he's meant to us."

"I have some history with Aqib. I think he's a really good player," says the Miami Dolphins head coach, Brian Flores. "We had an opportunity to acquire him and some draft capital, so we felt like that was the best move for us."