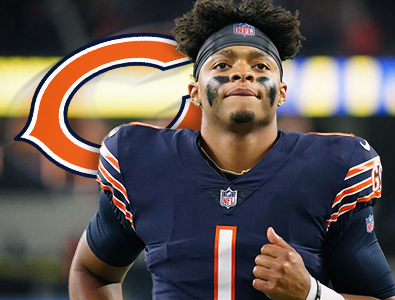 Coach Nagy has announced to the sports media that Andy Dalton is dealing with a knee injury that he suffered last Sunday against the Cincinnati Bengals as the Chicago Bears picked up their first win against the Cincinnati Bengals as Fields filled in for Dalton. Nagy assured everyone that Dalton will start at quarterback once he is fully healthy in the future. Dalton’s knee injury does not appear to be serious, and the Chicago Bears confirmed that his left knee injury is definitely not an ACL injury.

Over the course of the first 2 games for the Chicago Bears during this young 2021 – 2022 NFL season Dalton has gone 36 for 49 with a completion percentage of 73.5 %, 262 passing yards, 1 touchdown pass, 1 interception, and 4 sacks throughout his 2 games of NFL action. Andy currently has a quarterback rating of 52.3 so far this season for the Chicago Bears.

Fields has been on the field for 46 plays throughout the 2021 – 2022 NFL season for the Chicago Bears. During this time, he has gone 8 for 15 passing for 70 yards which gives him a completion percentage of 53.3 %. He has 0 passing touchdowns, 1 rushing touchdown, 1 interception, and 2 sacks. Justin has a quarterback rating of only 7.3 even though the young man has impressed many football analysts as well as the coaching personnel for the Chicago Bears at the moment.

Foles has yet to play during the 2021 – 2022 NFL season, and hopefully for the Chicago Bears he will not have to play this Sunday. If he does play this Sunday that would mean that Fields has either performed extremely poorly or that he has suffered an injury causing him to have to leave the football game.

"It's a great opportunity for Justin and for all of us as a staff to be able to take this thing and see where he goes with this," the Chicago Bears head coach Matt Nagy explained in regards to Justin Fields' first starting quarterback opportunity. "Andy is still battling through his injury. Like I said to you the other day, we're glad that it's not his ACL. We're not expecting him to practice today or to have him available this week, so he'll be week-to-week."

"I've been preparing for this moment for a long time," the Chicago Bears rookie quarterback Justin Fields stated. "My mindset doesn't change. I'm still going to have to play my football and just prepare the best I can. Like I said before, get a lot of practice reps and study, study, study, and get more comfortable and confident with the plays and stuff like that."

Throughout his time playing in the NCAA college football program with the Ohio State Buckeyes as well as his short time with the Chicago Bears in the NFL Fields has accomplished the following achievements, honors, and awards: Chicago Tribune Silver Football in 2020, 2 - time Graham – George Offensive Player of the Year in 2019 and 2020, 2 - time Griese – Brees Quarterback of the Year in 2019 and 2020, Big Ten Football Championship Game MVP in 2019, Second - Team All - American in 2019, and he was named to the First - Team All - Big Ten 2 – times in 2019 and 2020 once again.

Foles has accomplished the following achievements, honors, and awards during his football career: Super Bowl LII champion, Super Bowl LII Most Valuable Player Award, he was selected to the NFL Pro Bowl back in 2013, and he led the NFL in passer rating way back in 2013.

7 touchdown passes in a game (tied)