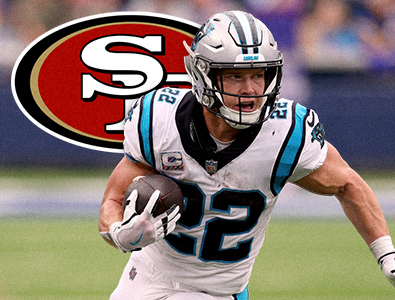 On Thursday, October 20th, 2022 the Carolina Panthers traded arguably the best player they had remaining on their 2022 - 2023 NFL team roster in the veteran superstar running back, Christian McCaffrey, to the San Francisco 49ers in exchange for a handful of future NFL draft picks.

For McCaffrey, the San Francisco 49ers are sending the Carolina Panthers a 2nd - round, a 3rd - round, and a 4th - round draft pick for the upcoming 2023 NFL Draft as well as a 5th - round selection for the 2024 NFL Draft.

In return for all those future NFL draft options the San Francisco Forty - Niners were able to acquire the amazing and elusive offensive playmaking juggernaut in McCaffrey which the San Francisco 49ers were desperately in need of in order to contend for a Super Bowl championship moving forward.

This NFL blockbuster trade also provides Christian the chance to be on a successful and winning team for the 1st - time since way back during McCaffrey’s rookie season in 2017 when the Carolina Panthers managed to go 11 and 5. In addition to that McCaffrey gets to return to the San Francisco Bay Area where he was a superstar NCAA college football player with the Stanford Cardinals from 2014 to 2016.

"I'm forever grateful for all of the people who have helped make these past 5 1 / 2 years so special for me," the star - studded dual threat running back, Christian McCaffrey, took to Twitter in order to send his love for all of the people of Carolina on the morning of Friday, October 21st, 2022 as he departs from the Carolina Panthers to join the San Francisco 49ers. "Thank you from the bottom of my heart. Carolina, I will always love you."

"McCaffrey's healthy," the head coach of the San Francisco 49ers, Kyle Shanahan, confidently stated. "And he looks the same as he used to. He is a problem."

A down and out Christian McCaffrey went on to say, "All I want to do is win,'' after last Sunday, October 16th, 2022 when the Carolina Panthers got spanked by the Los Angeles Rams with a final score of 24 to 10, which dropped the Carolina Panthers overall record of the 2022 - 2023 NFL season to a dismal 1 and 5. 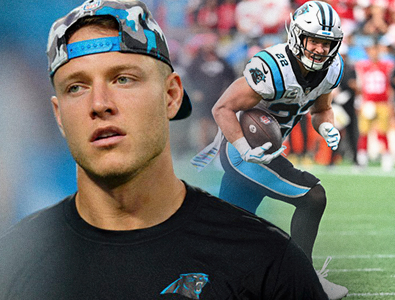 Throughout McCaffrey’s college football career at Stanford, he only suffered one minor injury. On October 8th, 2016 Christian was forced to miss just 1 – game vs. Notre Dame due to a hip injury.

Then McCaffrey went on to have a few NFL seasons without enduring any injuries until 2020 when Christian sustained a high ankle sprain, a shoulder A / C joint sprain, and a thigh / glute strain. McCaffrey played in only 3 of the 16 - regular season NFL games that season.

Finally, last year during the 2021 – 2022 NFL season McCaffrey suffered both a thigh / hamstring injury as well as a pedal ankle sprain (grade 2) causing the dominant running back to miss approximately half of the NFL regular season.

So far during this current season of the National Football League Christian has managed to stay healthy up until this point of the football season, but now with the highly - competitive San Francisco 49ers fighting hard to pull in wins, he may be carrying a larger work load that may or may not result in some sort of an injury with the severity of that or those injuries becoming quite important to the well - being of his new team and of course himself. Only time will tell.