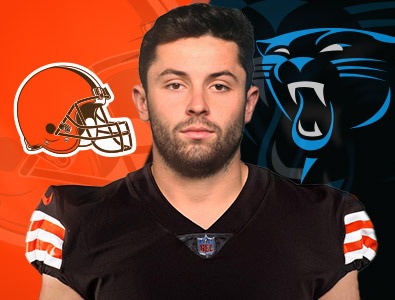 On Wednesday, July 6th, 2022 the Cleveland Browns traded quarterback Baker Mayfield to the Carolina Panthers in exchange for a 2024 conditional NFL draft pick.

The trade will require the Carolina Panthers to pay only $4.85 million of Mayfield's current 2022 - 2022 NFL salary, while the Cleveland Browns will be responsible for paying $10.5 million of the struggling quarterback’s salary for this upcoming NFL season.

Baker has agreed to the terms in order to convert the rest of his $18.8 million 2022 - 2023 NFL salary, which equates to approximately $3.5 million, into incentives for this year to facilitate this recent NFL blockbuster trade. As always, this NFL trade will become official once Mayfield passes a physical examination with the Carolina Panthers medical staff.

In exchange for Mayfield the Cleveland Browns are getting either a 4th - round or 5th - round draft pick from the Carolina Panthers during the 2024 NFL Draft. The deciding factor for that conditional draft pick will be determined by Baker's playing time with the Carolina Panthers this NFL season. In order for that conditional draft pick to become a 4th - rounder in 2024, Mayfield must play 70 % or more of the snaps during the quickly approaching 2022 - 2023 season of the National Football League.

"We want to thank Baker for all his contributions to the Cleveland Browns. From the moment he was drafted, he gave his all for this organization and this city. With his fierce competitive spirit, he excited the fanbase and accomplished things that no player at his position had done in Cleveland for a very long time. He also made a difference in the community, whether it was hosting events at the Boys and Girls Club, honoring our troops, supporting the Special Olympics as well as countless other charitable endeavors. We are grateful for everything he did for this organization and wish him and Emily well in the future," the owners of the Cleveland Browns, Dee Haslam and Jimmy Haslam, expressed in a recently released statement to the sports media outlets.

The Quarterback Situation of the Cleveland Browns

Tis Mayfield trade comes just after the Cleveland Browns traded for and signed the former Houston Texans’ troubled quarterback, DeShaun Watson, to a massive 5 - year $230 million contract extension in which all of the $230 million is fully guaranteed money. That contract extension carries the most guaranteed total money in the history of the NFL by an amazing $80 million margin as well.

So now with Mayfield gone, the Cleveland Browns quarterback room will consist of Watson, Jacoby Brissett, and Josh Dobbs. Due to the fact that Watson will most likely be suspended by the National Football League, for being accused in civil lawsuits by 25 different women for actions that include sexual assault as well as inappropriate behaviors during various massage sessions, Brissett may have to see significant playing time until Watson serves whatever suspension is handed down by the NFL.

The Quarterback Situation of the Carolina Panthers

The former # 1 overall pick during the 2018 NFL Draft in Baker now joins the Carolina Panthers football team that presently has Sam Darnold listed as their starting quarterback, and Darnold was the # 3 overall selection in the 2018 NFL Draft as well.

The Carolina Panthers also took the quarterback out of Ole Miss, Matt Corral, during the 3rd - round of this year's 2022 NFL Draft. According to sources around the league, the Carolina Panthers do not have any intention of trading Darnold following the acquisition of Baker Mayfield this week.

Now both Darnold and Mayfield, who previously competed with each other to become the # 1 NFL draft pick back in 2018, will once again be in some serious football competition throughout the Carolina Panthers’ training camp this summer as they both fight for the right to be the Carolina Panthers' starting quarterback for this upcoming 2022 - 2023 NFL season.

If Baker just so happens to win the Carolina Panthers’ starting quarterback job, then Mayfield’s 1st - starting QB assignment will be against his former team in the Cleveland Browns, who are currently scheduled to visit Carolina to play the Panthers during Week 1 of the NFL schedule. 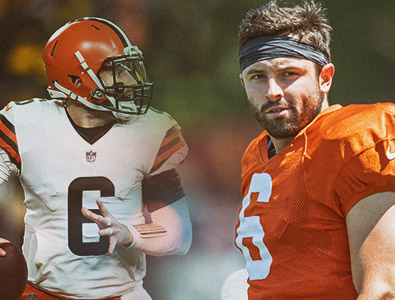 Baker was born in Austin, Texas, and he attended Lake Travis High School which is located approximately 20 miles west of Austin, TX where he excelled at the sport of football playing the position of quarterback. Mayfield ended up being the starting quarterback for the Lake Travis High School Cavaliers football team. Baker led LTHS to a record of 25 and 2 during two seasons and won the 2011 4A State Championship. Mayfield finished his high school football career with 6,255 passing yards, 67 touchdowns, and 8 interceptions.

He finished his college football career at the University of Oklahoma with 1,026 completions, 14,607 passing yards, 131 touchdowns, 30 interceptions, and 1,083 rushing yards to go along with his 21 rushing touchdowns.

The Cleveland Browns decided to take Baker Mayfield with the first overall selection in the first round of the 2018 NFL Draft. Mayfield has played with the Cleveland Browns from 2018 to the present, and Baker has shown signs of greatness at times while he has shown signs of a young struggling quarterback in the National Football League at other times.

Throughout his 4 - year NFL career Mayfield has recorded 14,125 passing yards, 92 passing touchdowns, 56 interceptions, a completion percentage of 61.6 %, a passer rating of 87.8, 571 rushing yards, and 5 rushing touchdowns.

His game has room for improvement, but Mayfield is a passionate leader of the whatever football team’s offense he runs. Baker displayed signs of greatness during the 2020 - 2021 NFL season by getting his team in the Cleveland Browns to the NFL playoffs as well as by defeating the Pittsburgh Steelers who are divisional rivals in the Wild Card round of the 2020 - 2021 NFL postseason that year.

Last season he struggled a was injured a great deal of the time. Playing through injury demonstrated his heart and love of the game, but that also hurt his football stock showing that he doesn’t always make wise decisions that sometime can hurt his football team.