Probability of a Perfect Bracket 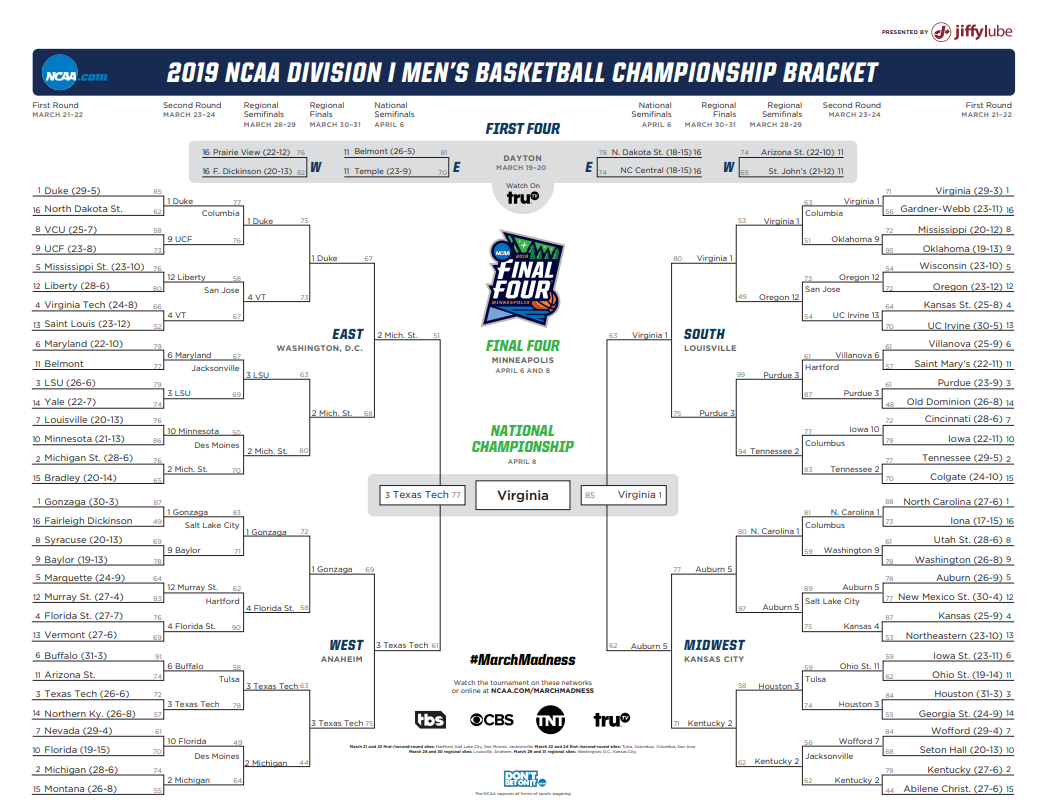 A question I get a lot in March is, "What is the probability of filling out a March Madness bracket completely perfectly?" A frequently quoted statistic in the media is 1 in 9,223,372,036,854,780,000. This quotation is based on guessing randomly, which nobody does, and makes the hair on the back of my neck stand up. Here I will give a basic strategy you can follow, knowing nothing about basketball, and an estimate of your probability of success with said strategy.

Following are the rules of the tournament. If you already know them, you can skip this part.

For most intents and purposes, the tournament is single elimination, starting with 64 teams. To satisfy my perfectionist readers, there are actually 68 teams, where eight of them are matched up in four games. The winners of those four games, and 60 other teams, result in 64 teams, which is when the bracket picking typically begins.

The 64 teams are divided into four different conferences, North, South, West, and East, of 16 teams each. Each team in each conference will have a "seed," from 1 to 16, which is meant to be a ranking of their ability, although it is an imperfect method. Next the following will happen:

Always pick the team with the higher-ranking seed, or lower number. For example, in the four games where a number 1 seed plays a number 16 seed, pick the number 1 seed. Of the 136 times a 1 seed has played a 16 seed, the number one seed won 135 times. 2018 saw the first number one seed lose to a 16 seed when UMBC (which has a great chess team) beat the University of Virginia.

When you get down to a number one seed winning each of the four divisions, pick the remaining three games randomly.

The following table shows many face-offs there have been among all unbalanced match-ups have that happened at least once. This does not include games where teams of equal seed played against each other. The right column shows the probability the higher ranked team won.

The way I used to analyze the probability of a perfect bracket was to look at historical experience of any one seed beating another seed. For example, the probability of a 4 seed beating a 5 seed. At the time of this writing, with 36 years of data from 1985 to 2021, such a matchup has happened 75 times, with the 4 seed winning 42 of them, for a probability of 56%. This is a decent method, but suffers from a small sample size problem. I think a better way to get at the probability of the higher seeded team winning any given game, according to the two seed numbers, is to look at all 2,268 tournament games played in the 36 years between 1985 and 2021. Doing so gave me the opportunity to smooth out the ups and down in the data and make for a better estimate. I get into how I did more more deeply in my page on March Madness.

The following table shows the probability of the higher seeded team winning any possible matchup necessary to win if the player picked the higher seeded team every game. In the case of a 1 seed playing a 1 seed, I assume a 50% chance of winining any given game. The "old method" probability looks at the exact probability, based on historical experience. The "new method" is based on my method of smoothing out the data to get a more accurate picture of the strength of any given seed.

Before going on, let me use the notation of pr(x) = probability of event x happening. For example, pr(rolling a total of 7 with two dice) = 1/6.

Remember that there are four divisions in the tournament, so for the first four rounds, the player will have to win any given matchup four times.

Under the new method, this probability of surviving to round 2 is 1 in 4,354.

The player will still have one more game to win, the championship game. If he survived this far, it will be another 1 seed vs. 1 seed. Let's again assume a 50% chance of winning. That brings the probability of survival through the championship game, for a perfect bracket, to about 1 in 13.6 billion.

By the way, using the old method results in a probability of a perfect bracket of 1 in 56.7 billion.

Warren Buffett has offered $1,000,000 per year, for life, to any employee of his who can fill out a perfect bracket. Warren has about 377,000 employees (source). Assuming each one followed the strategy above, and lived 60 more years, the expected value per employee is 0.4 cents and the expected cost to Mr. Buffet over all his employees is $1,667.

Discussion about this page in my forum at Wizard of Vegas.