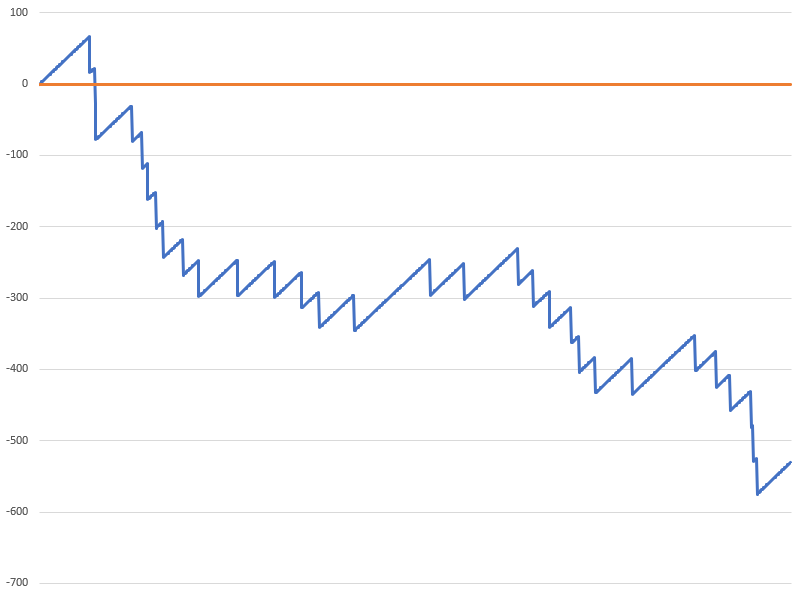 Oscar's Grind is a popular betting system. It is generally played on even money bets with a specified winning goal. Like most betting system, it usually achieves this goal, but at the expense of a large loss when it doesn't. Like every betting system, it can not pass the test of time and will eventually show a net loss.

Unlike most betting systems, like the Martingale, Labouchere or Fibonacci, the player will press his bets after winning, as opposed to losing. It also does not escalate the bet size as fast as these other systems, making it more of a "grind" to achieve the winning goal. This causes the chances of reaching the winning goal to be less than more aggressive systems, but also allows the player to play longer and at a smaller average bet.

Overall, Oscar's Grind will tend to win in a streaky game and do badly in a choppy game.

The following is how to play Oscar's Grind on even money bets.

Footnotes:
*: If the player doesn't have enough money to repeat the same bet, then he bets as much he can.
**: If winning the next bet would cause the player to overshoot his winning goal, then he reduces his bet to his winning goal minus his current balance.

Here is my flowchart of how to play. Start in the upper left square. Click on image for larger version. 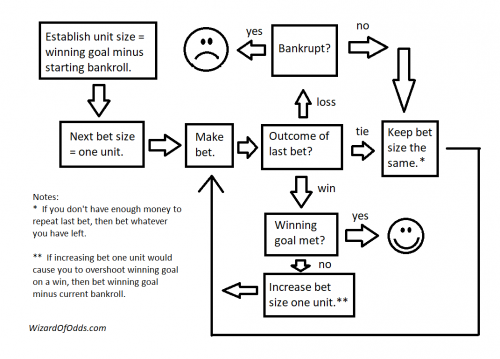 To show what to expect from using Oscar's Grind, I wrote a simulation that followed the rules above, based on various bets and games. The simulation used a Mersenne Twister random number generator. For each simulation, the winning goal was ten units. I tested the simulation on the following bankrolls: 10, 25, 50, 100, 250, and 500 units.

The next simulation is based on any even money bet in single-zero roulette. The simulation size was over 43 billion sessions. As a reminder, the theoretical house edge is 1/37 = 2.703%.

The next simulation is based on any even money bet in double-zero roulette. The simulation size was over 45 billion sessions. As a reminder, the theoretical house edge is 2/38 = 5.263%.

Here is my video on Oscar's Grind.

Discussion about Oscar's Grind in my forum at Wizard of Vegas.