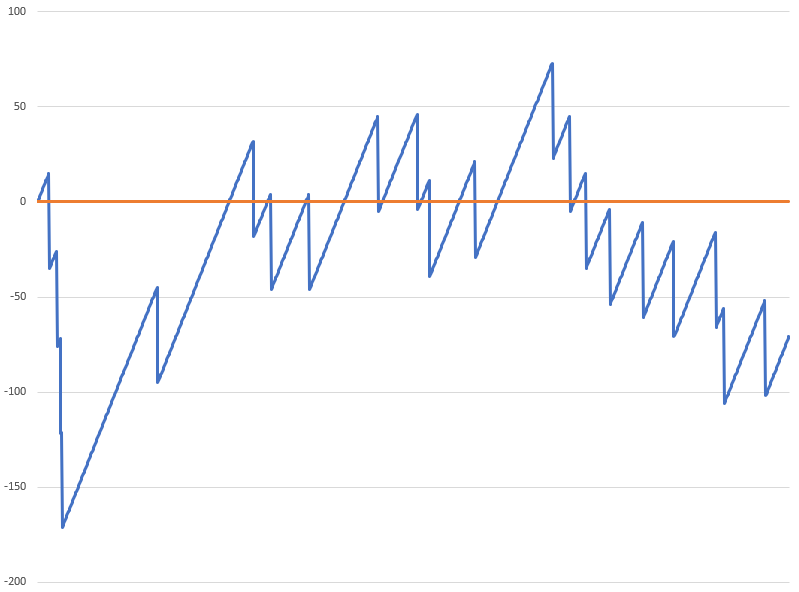 Like the Martingale, Labouchere and Fibonacci betting, the d'Alembert has the player chasing losses with larger bets. However, it is not as aggressive as those other progressive betting systems, resulting in more time at the table and less volatility. It is also at a cost of a lower probability of overall goal success.

The only thing that everybody seems to agree on about the d'Alembert is that the player increases his bet by a unit after a loss and decreases by a unit after a win. Other sources generally don't address the initial bet and winning or losing benchmarks. For purposes of my analysis, I start the player with a bet of one unit with a goal of winning one unit. Here is putting the whole system more formally.

In situations where the number of losses is equal or greater to the number of wins, the general formula for the net win is W - D*(D+1)/2, where:

W = Number of wins
D = Difference between wins and losses. In other words, losses minus wins.

Despite being able to win in moderately losing sessions, it is at a cost of small wins most of the time and huge wins in extremely cold sessions that wipe out those small wins over the long run.

To show what to expect from using the d'Alembert, I wrote a simulation that followed the rules above, based on various bets and games. The simulation used a Mersenne Twister random number generator. For each simulation, the initial bet and winning goal were both one unit. I tested the simulation on the following bankrolls: 10, 25, 50, 100, and 250 units.

The next simulation is based on any even money bet in single-zero roulette. The simulation size was over 25 billion sessions. As a reminder, the theoretical house edge is 1/37 = 2.7027%.

The next simulation is based on any even money bet in double-zero roulette. The simulation size was over 25 billion sessions. As a reminder, the theoretical house edge is 2/38 = 5.2632%.

Discussion about the d'Alembert in my forum at Wizard of Vegas.
Written by: Michael Shackleford