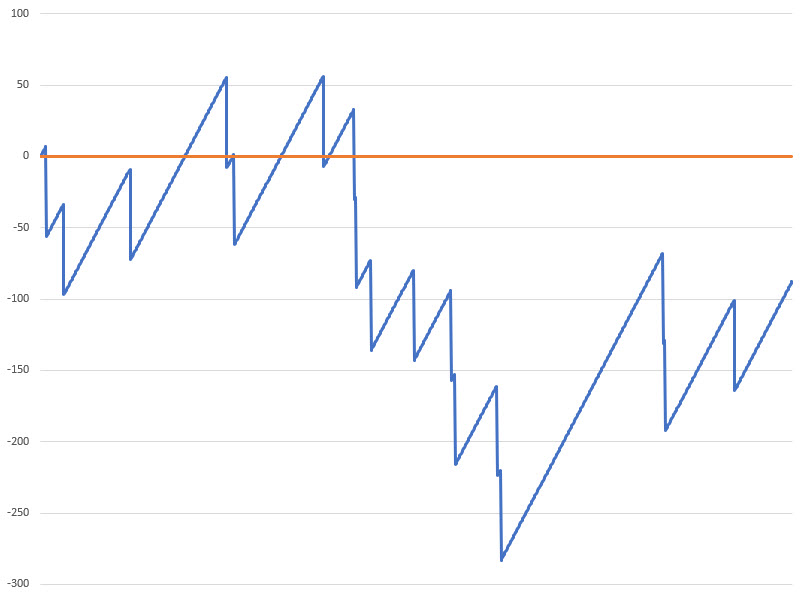 There can be little debate that the Martingale is one of the oldest and most popular betting systems. The siren's call of the Martingale has fooled many gamblers as it usually results in a session win. However, everybody has a finite supply of money and eventually the Martingale will take down even the biggest of bankrolls.

The following are the rules of the Martingale.

I don't think there is an official procedure if the player doesn't have enough money to double his last losing bet, but still has some money. I suppose what most players would do is bet it all. Then, keep betting the lesser of (1) whatever would be needed for achieve a session win and (2) everything left until either ending marker is achieved.

The following tables show what you can expect to happen under different bets and bankroll sizes. Below is an explanation of each column.

Let's look at the situation of the player being able to make up to six losing bets in a row. That would require a bankroll of 63 times the winning goal. The probability of achieving the winning goal of one unit is 98.3051%. If the player did this over and over, he could expect an average of 58.000094 winning sessions for each losing session of 63 units. Note that the loss of 63 units is greater than the 58 wins between losses. Finally, if the player keeps repeating this until he doubles his bankroll, one unit at a time, or goes broke, his probability of doubling his bankroll is 34.0634%.

Single-Zero Roulette — Any Even Money Bet

Double-Zero Roulette — Any Even Money Bet

Please enjoy my video on the Martingale.

If you want to maximize your chances at a session win, then your chances of achieving it are best with the Martingale. This is at the expense of very short sessions (so less fun playing) and abject disaster when things go bad.