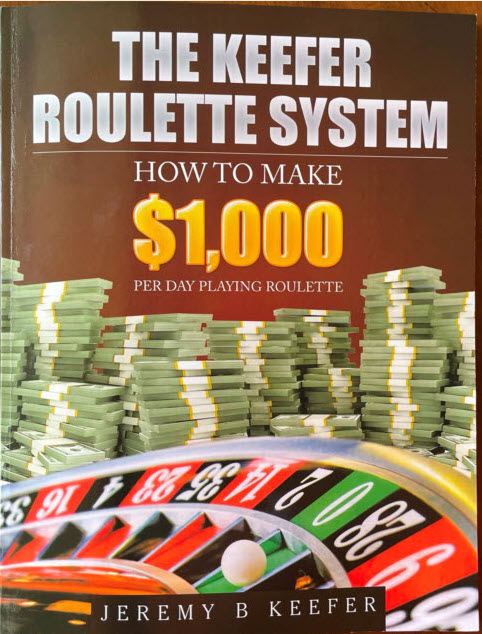 The Keefer Roulette System is a betting system promoted in a book by the same name. It basically a modified nine-step Martingale. Much like the Martingale, you can expect it to usually win small, but lose it all back and more when you reach the maximum number of losses. Like all betting systems, not only doesn't it overcome the house edge, it doesn't even dent it.

The hope behind this system is that the player will win enough between 192-unit bet losses to more than cover them. When the player loses nine hands in a row, counting the previous consecutive losses, that losing player will have lost 1+2+3+6+12+24+48+96+192 = 384 units. The book incorrectly argues that between 384 unit losses the player will win on average 1,733.4 units. I will explain later the flaw in the author's math.

Note that the two players will never bet the same amount at the same time.

It is assumed the two players share a common bankroll and may give each other money if one can't cover a bet.

As I will show later, it is ridiculous for the two players to make opposite bets. One can accomplish the same thing at less losses or more wins by just deducting the smaller bet from the larger one. This will result losing less, specifically double the smaller bet, every time the outcome of the bet is a zero.

Following are my results of a random simulation of over 39.7 billion sessions played. A session was defined as playing until nine consecutive losses were attained for the player on either side. The simulation was performed in Visual C++ with a Mersenne Twister random number generator.

Following is an elaboration on each field.

Why Keefer's Math is Wrong

On page 11 of Keefer's book begins the section "The Mathematics Behind the System." Here the author tries to explain why for every time the $5-unit player loses $1,875 dollars due to a string of nine consecutive losses, the player will otherwise win $8,667, for a net profit of $6,792.

He begins by correctly saying the probability of nine consecutive losses in double-zero roulette on an even-money bet is (20/38)9 = 0.3099%, or 1 in 322.69. Note that this is for betting one side only, as opposed to both sides in the case of the Keefer system, but let's ignore that and assume we are betting just one side.

With that error of 2,898 spins per session in the one-sided situation, the rest of his math falls apart.

Let's consider a simplified version of this system that bets on one side only, for example black. After every winning bet, the player will reset with a one unit bet next time. There are nine possible outcomes for the next sequence of bets until the next reset, whether it be because of a win or nine consecutive losses. The probability of losing exactly x times before a win, in double-zero roulette, is (20/38)x × (18/38). The probability of nine consecutive losses is (20/38)9.

Next, the player will net a one-unit win if the outcome after a reset is a win on the first or second spin. If the player goes 3 to 8 spins before a win, then the net outcome will be a push. The outcome for losing nine consecutive spins is a loss of 384 units.

Knowing the probability of every possible outcome and how much it wins, we can put together the following return table.

That the player does this twice at the same time means only that he will lose on average twice as much money. The odds on each side do not change.

I hope I have shown that not only doesn't the Keefer Roulette System have a player advantage, the disadvantage is exactly equal to the house edge in roulette. This is true of EVERY betting system. Thus, if you must use one, please use one of the free ones I list under Internal Links below.

Have you been burned by another betting system you paid for? Did it add insult to injury when the seller didn't refund your money? How about warning others through me to not buy it. I prefer it be able to be played on roulette, baccarat, or craps. It must also be clear how to use it. If it meets those requirements, I'll be happy to put it to a fair analysis and publish my results.

Discussion about the Keefer Roulette System in my forum at Wizard of Vegas.