Cannonbeards Treasure - (Learn how to play the right way) 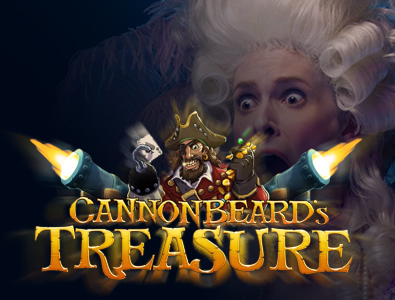 You may remember Zach from my interview last year. He is with Gamblit Poker. This year he is with a brand new game.

Nevertheless, it still has that Gamblit strategy and skill component.

The player needs to be able to add quickly in this game and be quick on the button he wants to win. Zach, can you tell me a little bit more about the rules of the game and the background of it?

[00:00:46] Zach Foley: Sure. This is a pirate themed game that combines luck and skill. The premise of the game, all the bets in the game relate to the point. The point is what we call the sum of the three dealer's cards.

The dealer starts off the game..

…by taking three cards out and what they add up to is the point. The players get to make two bets at the start of the game. One of the bets that you make whether you think that point is going to be a high number, 21 to 30, or a low number, 11 to 20. That one is an entirely luck based.

After that bet resolves, then the skill-based part of the game begins. The dealer gets each player one card face up and the first player to form a hand that has the same value as the point wins the pot.

The way you get a card in your hand:

is that the dealer takes it from the smart shoe, the computer reads the card as it comes out and appears on the screen. As it shows up on the screen, the first player to press the button claims the card and adds it to their hand.

The first player to match the point wins the pot.

Would that be correct?

[00:01:51] Zach: That is correct. There's a Cannonbeard's Treasure. It has a few variations from this game. This game has been modified to work with a live dealer and so if you are familiar with the mechanic of grabbing cards to add up to the point, it's exactly the same.

We've done some other things to make it more fun for a group setting at a table with a live dealer.

[00:02:12] Taylor Kennedy: Strategy tips, you got to bash that button to claim your card. I always say just go for it. If you have 10 or more, hit that card because you're not going to go but.

[00:02:21] Michael: Now, I have been playing a little bit already and lots of times I didn't get that card I needed. Do you have any tips as to timing exactly compared to when that card appears on the screen?

[00:02:32] Taylor: We do have a little bit of an insider secret. When the card appears on the screen flat, you'll see it kind of turn when the animation goes flat, that's the sweet spot where you want to hit. Of course, when you're competing against people, you never know who's going to be the fastest.

[00:02:46] Michael: Well, thanks, Taylor. You guys heard it here first. Zach, I also want to say congratulations, you won the best game award at last year's show and I bet on you.

[00:02:58] Michael: Yes, I was rooting for you guys at the table. If you heard a lot of cheering that was probably from me. Congratulations on winning last year. 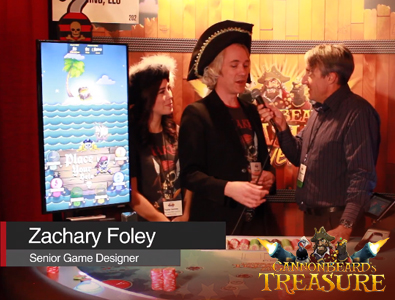 [00:03:25] Michael: This is Cannonbeard's Treasure Live. There are a couple of side bits based on the point which is three randomly cards dealt by the dealer that also determine the goal of the game. I bet on a total of 11 to 20. The point is 15 so I won my side bet, but now comes the main game.

Time for another game

Very fast moving. Again, I'm not sure what the term of bet is, but everyone bets the same amount. Okay, 29 is the goal this time. I lost my side bet because the point was not 11 to 20.

Next, every player gets a random card

Mine is 10 so I have 19 more to go. I have nine more to go now. He stole my nine. I'm too slow. I had two chances to win but I was too slow both times which illustrates the fun and excitement of this game. It's not just a game of math but also speed.

If you see that card you need…

…you have to be fast, but faster than the other players, but not so fast you're accidentally getting cards you don't need.

All right, the point this time is 19. I'm starting with 10 so I need nine more. Now, I need eight more. Player one got it exactly so he's the winner this time, but I'm going to keep playing till I win.

Player one won with one card. 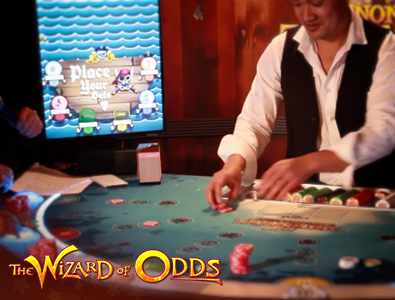 Yes, it can go that quick

Again, I was too slow

I needed that 10 and I didn't hit the button fast enough. Yes, the fast gentleman, player one won.

Thanks so much for having me. I thought this game was a lot of fun. It was very difficult to leave.