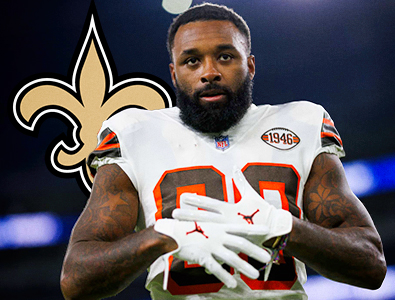 On Friday, May 13th, 2022, the New Orleans Saints announced that they are going to continue to renovate their wide receiver core by signing the former Miami Dolphin and Cleveland Brown as well as the 5 - time NFL Pro Bowler in the star veteran wide - out, Jarvis Landry, to a 1 - year deal.

Landry’s new 1 - year contract with the New Orleans Saints is reportedly worth up to approximately $3 million. This new agreement between Jarvis and the New Orleans Saints does not include a signing bonus, any guaranteed money, or any player incentives to sweeten the deal. Landry will now once again become a free agent of the National Football League following this 2022 - 2023 NFL season.

Landry was born in Convent, Louisiana, he played his high school ball at Lutcher High School in Lutcher, Louisiana, where he was a 3 - sport athlete in football, basketball, and track, and he played his NCAA college football career at Louisiana State University (LSU) with the LSU Fighting Tigers.

Jarvis is obviously a former stand - out star from LSU, and he is the 2nd - local football legend to join - up with the New Orleans Saints over the last 2 - weeks following their other key significant signing in their newly - acquired safety, Tyrann Mathieu, just last week. 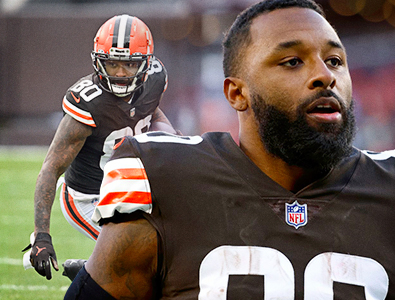 The New Orleans Saints wide receiver Michael Thomas missed the entire season due to an ankle injury, and their veteran star quarterback, Jameis Winston, missed the last 10 - games of the previous NFL season because of a torn ACL.

Thomas is expected to return sometime soon, and the New Orleans Saints made a variety of trades in the NFL in order to move - up and select the Ohio State University wide receiver, Chris Olave, with the 11th overall pick of the 2022 NFL draft.

The now 29 - year - old Jarvis, has compiled a career - total of 688 - receptions which is for 7,598 - receiving yards, and 37 - touchdowns throughout his total 8 - seasons in the National Football League with the Miami Dolphins from 2014 to 2017 and the Cleveland Browns from 2018 to 2021. The now 5 - foot 11 - inch and 196 - pound NFL wide receiver is going to potentially line - up mainly in the slot position for the New Orleans Saints, as he has done so throughout the majority of his career in the National Football League.

The New Orleans Saints have just so happened to make their 2 - most impactful and significant NFL offseason signings in May of 2022 following their display of some low as well as rare spending restraint during the 1st - 2 - months of free agency in the National Football League this year.

They began the year with approximately $75 million of spending money above their NFL salary cap, then the New Orleans Saints lost their left offensive tackle, Terron Armstead, as well as their safety, Marcus Williams, to other NFL franchises.

The New Orleans Saints former safety Malcolm Jenkins was lost to retirement from playing professional football too. They signed the former New York Jets safety Marcus Maye in addition to other minor contributors to their 2022 - 2023 NFL roster.

Jarvis obviously struggled last year due to a knee sprain in which he suffered during Week - 2 of the 2021 - 2022 NFL season. That injury managed to keep Landry out 5 - total weeks of the past NFL season. Jarvis finished the year with a disappointing 52 - pass receptions, which was good for only 570 - receiving yards, and 4 - total touchdowns. All of those number were absolute career - lows for Landry, and he is hoping that a change of scenery will do him a lot of good in having a much more productive upcoming 2022 - 2023 NFL season with his new team in the New Orleans Saints.