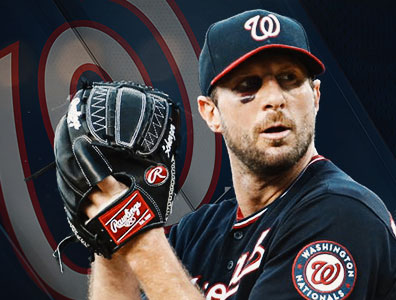 The ace of the pitching staff for the Washington Nationals as well as one of the best baseball players of his time, Max Scherzer, reaches the 200th strikeout mark for the eighth consecutive season during his historic career. Although he plays for a losing franchise his individual accomplishments are astonishing.

That is straight up amazing, one hell of a resume, and not many professional baseball players even dream of achieving half of that. Scherzer has tied the all-time MLB record for reaching 250 strikeouts in 5 straight seasons. Chris Sale of the defending World Series champion and recently struggling Boston Red Sox is Scherzer’s counterpart in the American League. He pitches with the same intensity, and he just climbed the 2,000 career strikeout ladder joining Max as one of the game’s elite pitchers in this era of baseball.

The Washington Nationals have played outstanding as of late, and they have now found themselves right in the heat of the fiery National League playoff race. While we wait to see how the Major League Baseball standings shake out over the course of the next month look for Washington to continue rolling as long as their bats do. It is all up to their offensive production and bullpen as their starting rotation has proved the Nationals belong in the MLB postseason this year.

"Obviously, we had a pitch count on him, but typical Max, he gave us what he had," says the manager of the Nationals, Dave Martinez. "I felt toward the end he was getting a little tired, but that's part of building back up."

"We're at the point in the season where there's no room for error," Scherzer explained. "I cannot get hurt. I understand that. That's why I'm going out there pitching under control. I'm not going to put my body in jeopardy."

"This is about attacking in a game, scoring first," Martinez stated. "That's been our message. They came out today, and that first inning was good."

"Tough to be down by five against Scherzer early and try to scratch your way back," says the manager of the Baltimore Orioles Brandon Hyde.

"He says he's real sore," Martinez replied. "X-rays were negative, so he's going to be day-to-day."