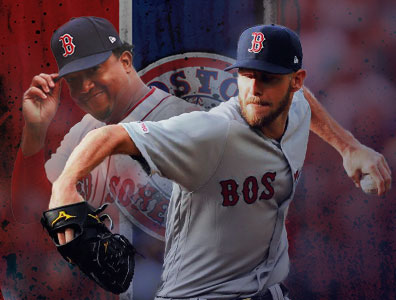 On Tuesday, August 13th, 2019 the Red Sox ace pitcher, Chris Sale, became the fastest pitcher to reach the milestone of 2,000 strikeouts. The 30-year-old hard throwing hurler began Tuesday’s game between the Boston Red Sox and the Cleveland Indians with 1,995 K’s.

In the first inning, Sale struck out the side adding three more strikeouts to his perpetually growing total. Then in the third inning he then reached his 2,000th strikeout by punching out the Indians rookie, Oscar Mercado.

The Red Sox ended up winning the baseball game 7-6 in 10 innings against the Indians. Sale finished the game with 12 strikeouts in 6 2/3 innings. He allowed Cleveland to score 5 runs three of which were earned runs, and he gave up 5 hits and 2 walks in this historic performance by the former Chicago White Sox pitcher.

Sale is the fastest MLB pitcher to reach 2,000 strikeouts by doing just that in 1,626 innings. Pedro Martinez who also played for the Boston Red Sox hit the milestone in 1,711 1/3 innings. It took Randy Johnson 1,733 1/3 innings to pile up 2,000 punch outs, and Max Scherzer accomplished the feat in 1,784 total innings.

"It's cool. It's special," explained Chris. "I'm not a guy who is really into his stats, but I respect it. I appreciate what it means. A lot of people put in a lot of hard work to help me get there."

Sale has experienced turmoil over the course of the 2019 MLB season. He began his 25th start of the year with a record of 6-11 with an earned run average of 4.41. Although this is definitely not Sale’s best Major League Baseball season, he has the best strikeout to walk ratio in the big leagues since 1920 with the mark of 5.9 strikeouts per 1 walk. That is a pretty unbelievable statistic. Here are some more statistics looking at the MLB career that Chris Sale has put together over the last 10 years.