Vince Carter Officially Retires after 22 Seasons Playing in the NBA 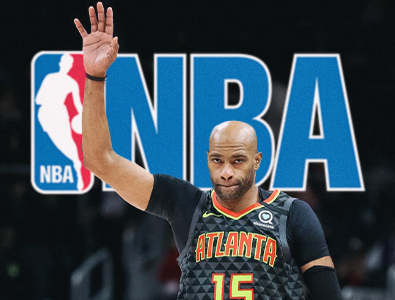 Earlier this week Vince Carter officially announced that he is retiring from playing ball in the National Basketball Association. Carter was well known for his dunking ability, and he always put on a good show each and every night for an amazing 22 NBA seasons.

Carter entered the NBA after playing three seasons with the University of North Carolina Tar Heels where he helped lead his team to the NCAA Final Four twice. He was selected with the fifth overall pick in the 1998 NBA draft by the Golden State Warriors, but he was immediately traded to the Toronto Raptors where he emerged as an NBA superstar quite early in his pro basketball career.

In 1999, Carter won the NBA Rookie of the Year award, and he followed that up with winning the Slam Dunk Contest during the 2000 NBA All Star weekend. Also, in the year 2000 Carter won an Olympic gold medal with team USA in Sydney, Australia. He played for the Toronto Raptors from 1998 up until 2004 when he was traded to the New Jersey Nets.

Carter played with the New Jersey Nets from 2004 to 2009 before bouncing around for the majority of his later years in the National Basketball League with several teams. Vince played for the Toronto Raptors, the New Jersey Nets, Orlando Magic, the Phoenix Suns, the Dallas Mavericks, the Memphis Grizzlies, the Sacramento Kings, and the Atlanta Hawks before hanging up his sneakers now in 2020.

Although Vince never won an NBA championship or had very much team success throughout his outstanding career, he was always considered one of the best and most explosive players in the National Basketball Association for the majority of his long and fruitful NBA tenure. Vince made NBA history earlier this year by being the only player to appear in at least one game in four different decades. Carter finished his amazing NBA career with 25,728 points, 6,606 rebounds, and 4,714 assists.

"If there was any disappointment because of the season -- any of that -- it was kind of easier to put it aside and handle it that way," says the basketball legend Vince Carter. "It's like, OK, it's something bigger than my career. ... It's unfortunate, but with the coronavirus taking people's lives rapidly, that's the big picture in my mind.

"So I was able to put the weird ending -- the abrupt stoppage of play, to an ending -- aside for the bigger picture."

The Commissioner of the National Basketball Association Adam Silver stated, "Vince Carter has made an indelible impact on the NBA with his remarkable skill and enduring commitment."

Silver referred to Carter as, "A true ambassador of the game.''