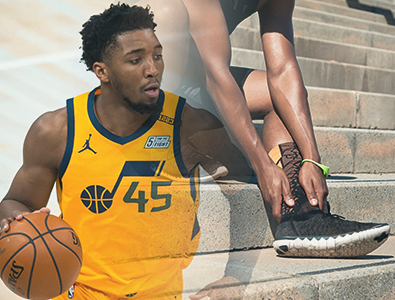 On Friday, April 16th, 2021 the Utah Jazz took on the Indiana Pacers at home at the Vivant Arena located in Salt Lake City, Utah when the Utah Jazz’s young scoring machine shooting guard, Donovan Mitchell, went down to the floor grabbing his right ankle in excruciating pain with 8 minutes and 20 seconds left in the 3rd quarter of this game. Mitchell did not return to the game as he was more seriously injured than anyone on the Utah Jazz’s organization would like to know.

The Utah Jazz did end up winning the basketball match – up against the Indiana Pacers by the final score of 119 to 111.The head coach of the Utah Jazz, Quin Snyder, had this to say regarding Mitchell’s injury after the game, "Obviously we hope that it's nothing serious, but they're in the process of doing everything they can do to assess that."

Other Injuries for the Temporarily Beat – Up Utah Jazz

According to the team’s sources the resilient Utah Jazz will also be without their veteran star center Rudy Gobert as he has a right knee contusion, their very valuable point guard Mike Conley Jr. as he deals with right knee soreness, and their other center Derrick Favors who is suffering from right knee soreness at the moment. The Utah Jazz are taking all three of these injuries to these very important players day to day, and they should all be back to game action sometime very soon.

Diagnosis of the Right Ankle Injury

Following Mitchell’s various x – rays and MRI’s as well as a thorough evaluations from medical specialists, team physicians, and other doctors that were consulted they all agreed on the diagnosis of a right low – ankle sprain for Donovan. In other words, there was no structural damage to Mitchell’s lower right leg.

He will have to miss several games for the first place in the NBA’s Western Conference, Utah Jazz, due to Donovan’s injury as well as rehabilitation, but it could have been much worse for the Utah Jazz’s arguably best player who has been averaging 26.4 points per game, 4.4 rebounds per game, 5.2 assists per game, 1.0 steals per game, and 0.3 blocks per game while only turning the ball over 2.8 times per contest so far during this 2020 – 2021 NBA regular season which is beginning to wind down now.

The injury to Mitchell comes just days after their division rival in the Denver Nuggets received possibly the worst news that their organization could at this point in the heavily contested 2020 – 2021 NBA season. On Monday, April 12th, 2021 the Denver Nuggets young and talented superstar point guard, Jamal Murray, drove to the bucket while splitting two defenders with only 50.6 seconds left on the game clock in a battle against the Golden State Warriors who were winning 111 to 104 at the time, and without any apparent contact made on the play Murray went down to the floor in obvious pain while grabbing his left knee.

The Denver Nuggets ended up losing that game on the road to the Golden State Warriors with a final score of 116 to 107. The following day the high – flying guard of the Denver Nuggets underwent an MRI, and the results yielded a torn anterior cruciate ligament (ACL) of his left knee. The Denver Nuggets have officially announced that Murray will now be out of the line – up indefinitely as a result of this severe injury. As the majority of ACL tears require surgery and approximately a year of rehabilitation it is safe to say that you will unfortunately not see the unquestionable basketball skills of Jamal Murray in game action until late in the 2021 – 2022 season of the National Basketball Association.

Luckily for the Utah Jazz their season still has strong life to it as I fully expect the Jazz not to rush Mitchell back in to game action prior the 2020 – 2021 NBA playoffs. I believe Donovan will hit the court running again until the Utah Jazz’s game against the Phoenix Suns on Friday, April 30th, 2021 as their four games prior to that are against the struggling Houston Rockets, the worst team in the NBA right now in the Minnesota Timberwolves twice, and then at the Sacramento Kings on Wednesday, April 28th, 2021.

According to Intertops sportsbook these are the odds as of Sunday, April 18th, 2021 to win the 2020 – 2021 NBA championship outright. Currently the Utah Jazz minus Donovan Mitchell temporarily have the fifth best odds to win the NBA championship title this year. It will be a hard road to victory for the Utah Jazz if Mitchell does not return to the Utah Jazz starting line – up 100 % healthy for the 2020 – 2021 NBA playoffs, but crazier things have happened in the postseason of the National Basketball Association.

The two teams in the Western Conference of the NBA that have better odds to win the NBA Finals this season are the Los Angeles Lakers and the Los Angeles Clippers, but I would not be surprised if the Phoenix Suns jump ahead of the Utah Jazz sometime soon if they continue to dominate the landscape of the National Basketball Association.