Home › online gambling › The uncertainty of the Chicago Bears QB Justin Fields playing this Sunday vs. the New York Jets

The uncertainty of the Chicago Bears QB Justin Fields playing this Sunday vs. the New York Jets 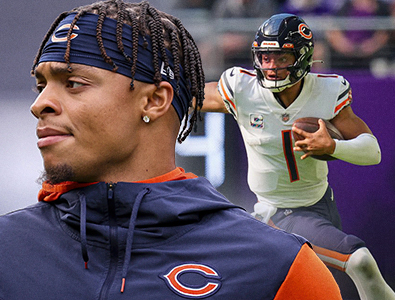 On Monday, November 21st, 2022 the Chicago Bears announced that their young, explosive, and highly - valuable quarterback, Justin Fields, has a semi - serious injury to his non - throwing shoulder which he sustained late in last Sunday afternoon’s game to the Atlanta Falcons in which the Chicago Bears lost that contest with a final score of 27 to 24.

The Injury to Justin Fields

Fields managed to injure his left (non - throwing) shoulder on the very 1st - play of the Chicago Bears' final drive of the game last weekend when Justin ran over towards the Chicago Bears’ sideline for just a 1 - yard gain on a play was that a designated and designed run for the Chicago Bears quarterback.

Justin just so happened to land quite hard right on his left shoulder in out of bounds territory immediately following the tackle, and he was extremely slow to get back up after that hit. Fields then absorbed another hard hit to the already affected and injured area of his left arm merely just a few moments later on another run play when the Atlanta Falcons defensive tackle, Grady Jarrett, crushed the Chicago Bears quarterback with the crown of his helmet as Justin was attempting to safely slide down.

The Chicago Bears managed to blow their late - game chance at pulling off a game - winning drive on their 3rd and final offensive play of the contest when Justin threw an ill - advised pass that happened to get tipped off the hands of the Chicago Bears running back David Montgomery and right into the strong grasping hands of the Atlanta Falcons safety, Jaylinn Hawkins.

After the loss versus the Atlanta Falcons last Sunday, November 20th, 2022, Fields was carefully carted off of the field and back into the Chicago Bears locker room, where he immediately got X - rayed as well as provided an I. V. treatment too. During Fields’ postgame news media conference, Justin was not wearing a shoulder sling, and he stated that he did not know the extent of his injury at that time. 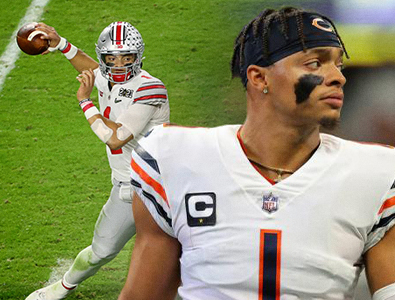 Fields also revealed to the public that he was battling a left shoulder injury last month, but the Chicago Bears’ quarterback cleared things up by saying that Sunday's injury was a completely different injury than the previous one he disclosed on October 20th, 2022. Justin was also witnessed getting some treatment on his hamstrings during the 2nd - half of last weekend’s game following him battling his way through cramps especially during the 4th - quarter of the Chicago Bears match - up with the Atlanta Falcons.

"I was hurting but it was the last drive of the game," the Chicago Bears QB Justin Fields mentioned. "I was just trying to be there for my teammates and fight through the pain. The pain right now is pretty bad. I'll just take it day by day and see how it feels later in the week."

Last Sunday vs. the Atlanta Falcons Justin was once again the Chicago Bears leading rusher as he recorded 18 - carries which was good for 85 - yards as well as 1 - touchdown. Through the air Fields went 14 - of - 21 passing for 153 - passing yards and another touchdown, but he also threw that 1 - interception at the end of the game.

After rushing the ball for 14 - times throughout the 1st - half of the contest, which was the most first - half rushes by any NFL quarterback since way back in the year of 2000, Fields' mobility decreased as the game progressed. Justin ran only 4 - times for 12 - yards in the 2nd - half of the game that including 2 - times on the Chicago Bears last offensive drive of that road game for the Chicago Bears. Fields had zero scrambles during the 2nd - half following him having five - runs that was good for just 33 - yards during the 1st - half.

As of today (Tuesday, November 22nd, 2022) the Chicago Bears extremely determined as well as talented quarterback in Justin Fields is considered "day - to - day," according to the head coach of the Chicago Bears, Matt Eberflus.

"Obviously, you guys know the injury report comes out Wednesday and right now it's day - to - day," Eberflus explained. "We'll see where he is on Wednesday. So, we've got time, we'll see where it is and go from there."

Coach Eberflus refused to reveal the Chicago Bears’ plan for Fields this upcoming weekend until the NFL - mandated injury report comes out Wednesday, November 23rd, 2022 as he is looking for a competitive advantage in terms of keeping the New York Jets guessing as well as preparing for whether the Chicago Bears will start Fields or their back - up quarterback, Trevor Siemian, at quarterback during their Week 12 regular season NFL match - up against the New York Jets. Eberflus did not want to state whether or not the Chicago Bears QB in Fields did indeed or not indeed suffer a season - ending injury last Sunday afternoon.

"We have not ruled that out at this point," Eberflus goes on to say. "We'll see where it is on Wednesday. No, no. Justin said he was good, and he went back in. We just took the timeout and went from there. We know he's dealt with that before because obviously he puts out a lot of energy during the game, and we're going to call our plays that we think are the best there, so that's what we did and we went with it."

The Chicago Bears have only 2 - NFL regular season games left (versus the New York Jets and Green Bay Packers) prior to the Chicago Bears’ week - 14 bye week. The Chicago Bears will need to weigh the longer - term effects of Justin Fields' injury in order to decide whether or not to sideline him for a particular period of time so that they feel comfortable that they are preserving his overall health for the long haul of his NFL career.

"Certainly, all those things have to be looked at," Eberflus recently told the major sports media outlets. "When you're looking at injury for any player, what are the long - term effects of that and then where is it? Where exactly is it? Is it something that we can play through or is it something that we can have rest? With any player, we take equation into those two things."

If Justin does indeed have to miss playing time, the Chicago Bears will be forced to turn to their back - up QB in Siemian, who just so happened to sign with Chicago during the 2022 NFL offseason. Eberflus did not believe the Chicago Bears would have to make many changes in terms of tailoring their offense scheme so that it fit the capabilities of Siemian's skill set especially vs. the New York Jets on short notice this weekend.

Running back David Montgomery expressed all of the challenges the Chicago Bears offense will face if Fields is out of action this Sunday, November 27th, 2022 versus the New York Jets who are also facing some controversy at their starting quarterback situation following last weekend’s meltdown with Zach Wilson. 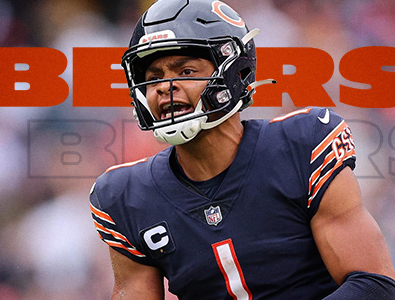 "It'd be very different, especially losing a guy like that," the Chicago Bears running back David Montgomery exclaimed. "Especially losing Justin, who he is and what he means to this team and to this offense. Yeah, it's going to be super difficult to not have him. But, you know, Coach [Luke] Gets[y] and the offense, we prepare all those guys the same. Whether it's Nate [Peterman] or Trev or whoever it is, we're all prepared to roll. Justin's always ready to roll too."