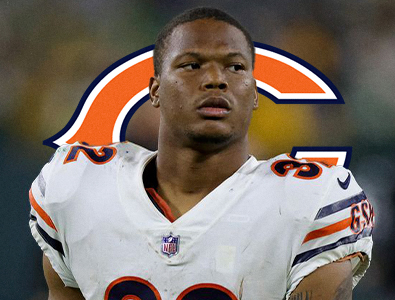 According to the Chicago Bears head coach, Matt Eberflus, the condition for David Montgomery’s right knee and right ankle injuries are, “good.”

"He's going to be day - to - day, so that's a positive," Eberflus goes on to say. "We'll see where he is tomorrow and re - evaluate it from there. It's a positive, for sure."

The injury occurred when …

… Montgomery was blocking in pass protection, and his right leg got rolled up underneath his body with 8 - minutes and 44 - seconds left to play in the 1st - quarter of last Sunday afternoon’s game against the Houston Texans. At that moment the Chicago Bears were driving down the field from approximately the Houston Texans 35 - yard line.

The now fourth - year running back for the Chicago Bears was examined on the field by the Chicago Bears medical staff prior to him walking off of the field gingerly but under his own power. David was then examined in more detail in the pop - up medical tent on the Chicago Bears sideline before having to head to their locker room, and he was unable to return to the game last weekend.

During the game the Chicago Bears had made an announcement that Montgomery was doubtful to return, but they never fully ruled him out from returning to the match up against the Houston Texans last Sunday. Eventually the Chicago Bears disclosed that David unfortunately suffered 2 - separate injuries on that play when he went down, but Eberflus decided to decline addressing anymore of the specifics at that time. 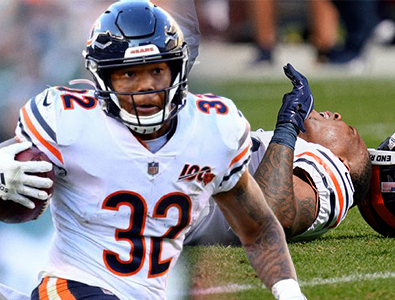 "It's lower leg right now, so we'll just look at it," Eberflus explained. "There's a couple things going on there, but we'll look at it."

Montgomery was immediately replaced by the Chicago Bears back up running back, Khalil Herbert, who went on to fill in very nicely for David by rushing for 157 - yards on 20 - carries as well as scoring 2 - touchdowns. Herbert stated that Montgomery was in "good spirits" when they were texting with each other following the game last Sunday afternoon, and Herbert let Montgomery know that he dedicated his powerful rushing performance to him and the Chicago Bears win in Montgomery’s honor.

"Told him that was for him," Herbert expressed. "Got to hold it down and help the team win and find a way to win."

As an entire football team, the Chicago Bears finished the game against the Houston Texans last weekend with a total of 281 - rushing yards, which was their most rushing yards in a regular season NFL game since 1984 when they surpassed the 283 - rushing yards that were compiled that game against the Dallas Cowboys. Throughout the duration of the first 3 - games of this 2022 - 2023 NFL season, the Chicago Bears are averaging an astonishing 187 - yards rushing per game.

Other Chicago Bears Injuries during Week 3

The Chicago Bears wide receiver, Byron Pringle, also was forced to leave the game vs. the Houston Texans during the 1st - quarter with a calf injury of his own. Pringle was seen noticeably walking back to the locker room, and he did not return to game action as well.