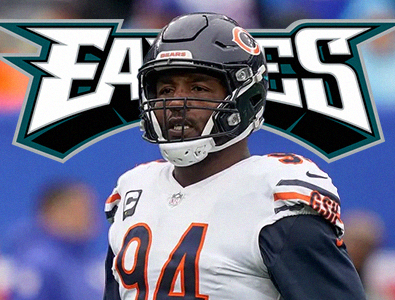 On Wednesday, October 26th, 2022 the Chicago Bears traded their veteran pass - rushing / sack - master in the defensive end, Robert Quinn, to the Philadelphia Eagles in exchange for a 4th - round draft pick. Both of those historic NFL franchises announced the final terms of the trade assuming that Quinn passes his pending physical examination with the Philadelphia Eagles.

Robert has always given all of his sweat, blood, and tears for the Chicago Bears since they acquired Quinn back in April of 2020 when he ultimately inked a 5 - year contract with the Chicago Bears worth up to approximately $70 million back when he was last a free agent of the National Football League. The Chicago Bears will be facilitating the bulk of Quinn's 2022 - 2023 NFL salary according to various sources.

"Obviously, part of the tough thing with this job and the position are the tough decisions you have to make," the Chicago Bears general manager, Ryan Poles, stated. "I almost feel like there's the emotional side, the human part of it that you know you're affecting not only a man but his family. You're kind of shaking that all up, and I don't take that lightly at all and I'm sensitive to that. You also know that you're tweaking the fibers of your locker room, and that's a big deal, too. And on the business side, it just made too much sense for what we're trying to do. It's going to allow us to continue to build a highly competitive roster."

The NFL Franchises that Robert Quinn has Played For

This is the ungodly 3rd – occasion when Robert has been traded throughout the course of his illustrious 12 - year career of playing ball in the National Football League, and it marks the 2nd - time that Quinn was traded to a team in the NFC East division of the NFL. Robert was previously sent from the Los Angeles Rams to the Miami Dolphins back in 2018, and then he was traded to the Dallas Cowboys just 1 - short year after that.

The Chicago Bears Current Rebuilding Phase of their Legendary Organization

The Chicago Bears outstanding veteran middle linebacker in Roquan Smith as well as the pass - rushing and sack - specialist in Quinn have been the subject of possible and potential trade rumors throughout the 2022 NFL offseason and in to the 2022 - 2023 NFL season following the Chicago Bears hiring a new front office and coaching staff that saw the Chicago Bears franchise have to eventually part ways with over 20 - players from the Chicago Bears' previous 2021 - 2022 NFL regime.

Including trading fellow superstar veteran pass - rushing specialist, Khalil Mack, who was sent packing to the Los Angeles Chargers back in March of 2022 in exchange for a 2022 2nd - round NFL draft choice as well as a 2023 6th - round NFL draft pick.

Robert just so happens to be a 3 - time NFL Pro Bowl selection at the defensive end position, and Quinn broke the Chicago Bears' long - time standing single - season franchise sack record with 18.5 sacks last year in 2021. Although Robert’s overall statistics have seemed to die down during this season so far, Quinn is still considered as one of the top pass - rushing specialists in the entire National Football League these days. Over the course of Quinn’s 7 - games so far this NFL regular season, Robert has recorded only 1 - sack, 3 - quarterback hits, 2 - tackles for a loss, and 8 - total tackles.

The Chicago Bears defensive captain and premier middle linebacker in National Football League, Roquan Smith, uncontrollably displayed many of his emotions while giving his sports media news conference for the Chicago Bears on Wednesday, October 26th, 2022 when Smith was eventually asked to expand upon the reports of this latest NFL blockbuster trades including Quinn and the Philadelphia Eagles.

"Let me take a second for a second, if you don't mind," the Chicago Bears superstar linebacker, Roquan Smith, emotionally explained while he was seen wiping away tears. "You know, I have a great deal of respect for that guy. Damn. Crazy."

During his short time with the Chicago Bears Quinn was the recipient of the Chicago Bears' Jeff Dickerson Media Good Guy Award back in 2021, and he was looked up to as a well - respected member of the Bears locker room by his teammates and coaching staff as well as being voted a team captain of the Chicago Bears too. General Manager Poles now was able to reflect upon the unfortunate and emotional factors of deciding to execute this NFL trade several times last Wednesday.

"And that's when I talk about the emotional part, that definitely is," Poles goes on to say. "I value -- I think I've talked about that a lot -- the locker room and what it means and the culture, and it sucks to mess with that, to be completely honest with you. But again, my job is to do what's best for this organization not only now but in the future. I felt like that was the best move for us to make." 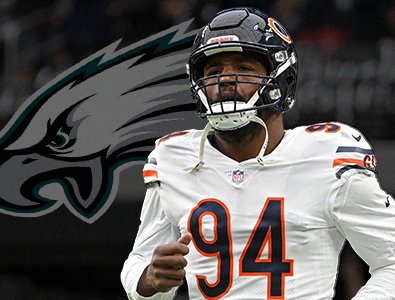 What does this NFL trade mean for the Philadelphia Eagles?

Especially following the Philadelphia Eagles watch their former starting defensive end, Derek Barnett, getting sidelined for the remainder of the 2022 - 2023 NFL season due to a torn ACL during the Philadelphia Eagles regular season opener versus the Detroit Lions. Quinn will now join a solid squad defensive line that includes some great players such as Josh Sweat, Brandon Graham, and Tarron Jackson, who have combined for 5.5 sacks already on the year.

"I think it's another great player on this team. He has a history of being a great defensive end and edge rusher, and I think he'll help us out in a number of ways," the Philadelphia Eagles exciting young starting quarterback, Jalen Hurts, said. "Adds a lot of depth, and I'm excited to meet him [Thursday] when he comes."

The Final NFL Season with the Chicago Bears for Robert Quinn

Quinn reported to the Chicago Bears 2022 mandatory training camp on time following him skipping out on all other activities of the Chicago Bears' entire offseason football training program, including the mandatory minicamp back in June of 2022. Quinn publicly mentioned then that he was never anticipating to go anywhere while also making reference to the uncertainty of a decision that is not up to him in terms of being moved to another NFL team.

"I've been traded twice," the former Chicago Bears defensive end, Robert Quinn, expressed. "You get tired of moving. I thought I did a good job last year, but I guess I'll just continue to try to reprove myself. ... I expect to be here, but I guess if not, well, that's out of my control. I'm just going to take it day by day and have fun here with the guys and just let life take its course."

Poles divulged during the Chicago Bears 2022 NFL offseason that he did not intend on trading Quinn. What eventually changed his mind in deciding to trade Quinn was the way in which the other young Chicago Bears’ pass - rushers have performed so far during this 2022 - 2023 NFL regular season.

"I really do trust in Gipson. He's had a good start to the season," Poles confidently disclosed to the major sports media outlets. "Muhammad, he's brought intensity and toughness to that group. And even young Dom Robinson has flashed -- he tipped that ball that Roquan got the other day and has a promising future, and I think he's going to continue to trend upwards."

The Philadelphia Eagles with Robert Quinn this Season

The Philadelphia Eagles should increase their defensive dominance this year especially on their front - 3 or 4 defensive lineman. Philadelphia continues to improve an already outstanding football team that can contend not only in the highly - competitive NFC, but they can compete with any team in the entire National Football League.

Presently the Philadelphia Eagles have compiled an overall record of 6 and 0 so far this year, and their next upcoming football is this weekend on Sunday, October 30th, 2022 against the Pittsburgh Steelers (2 - 5) who are trying to find themselves during a year characterized as a rebuilding season that has been complicated with injuries as well.