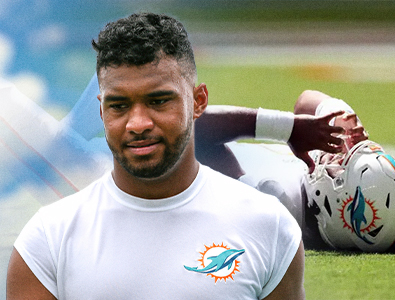 On Thursday, September 29th, 2022 the Miami Dolphins young, talented, and injury - prone quarterback, Tua Tagovailoa, had to be carted off of the field and taken to a local hospital in Cincinnati, OH with head and neck injuries which Tua suffered on a 2nd - quarter sack in the Miami Dolphins Thursday Night Football game against the Cincinnati Bengals.

Tagovailoa hit the back of his head on the ground (for the 2nd – week in a row) when he was sacked by the Cincinnati Bengals nose tackle Josh Tupou, and Tagovailoa’s arms apparently seemed to seize up pretty much immediately following that hard - hitting sack. Tua remained down on the field for approximately 10 - minutes prior to being loaded onto a full - body stretcher and taken off of the field on a cart.

The Miami Dolphins announced a little before the halftime break that Tua was fully - conscious, and that he had complete movement in all his extremities at the hospital he was transported to, the University of Cincinnati Medical Center. After the end of the football game, the Miami Dolphins states that Tua was projected to be discharged from the hospital late Thursday night in order for him to travel back to Miami, FL with his team.

The head coach of the Miami Dolphins, Mike McDaniel, disclosed that Tua called for him when he went down as this team seems to be extremely close.

"I could tell it wasn't the same guy that I was used to seeing," McDaniel explained. "It was a scary moment. He was evaluated for a concussion. He's in the concussion protocol, but he's being discharged. It's an emotional moment. It's not a part of the deal you sign up for. His teammates and myself were very concerned, but he got checked out and it's nothing more serious than a concussion."

The entire Miami Dolphins NFL franchise that was present gathered at midfield as Tua was taken off of the gridiron not under his own power, and the crowd in Cincinnati continued to chant, "Tua! Tua!" 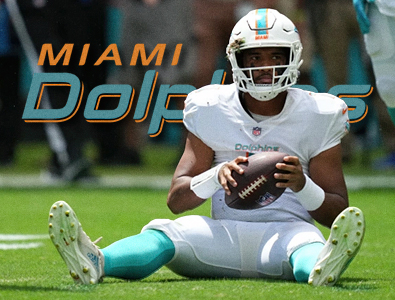 During last Sunday afternoon's hard - fought victory over the dominant Buffalo Bills team, Tua underwent concussion protocol evaluations at halftime following him hitting the back of his head on the turf, and then Tagovailoa stumbled on his feet while trying to make his way back to the Miami Dolphins huddle. The Miami Dolphins originally listed him as questionable to return to that game due to a head injury, but later they claimed it was related to a back injury that caused him to stumble. Later in the week Tua said that he passed every concussion protocol medical evaluation before he ultimately took the field again to lead the offense of the Miami Dolphins.

The NFL Players Association (NFLPA) requested that the league review and analyze him for the NFL's concussion protocols after last weekend’s injury that Tua suffered before he is cleared to play again in an NFL game.

"Player health and safety is at the core of the union's mission. Our concern tonight is for Tua and we hope for a full and speedy recovery. Our investigation into the potential protocol violation is ongoing," the NFLPA said in a recently released statement following Tua getting hurt during Thursday Night Football on Thursday, September 29th, 2022.

When McDaniel was asked whether or not he knew with 100 % confidence that Tua was not concussed after last Sunday's game, he replied yes, and McDaniel stated that his starting quarterback was cleared by an independent neurologist.

"People don't stray. We don't mess with that. As long as I'm the head coach, that will never be an issue," McDaniel expressed.

After the Miami Dolphins head coach was asked whether or not there was anything he could have done differently following the game against the Buffalo Bills, McDaniel replied, "Absolutely zero patience for or will ever put a player in position for them to be in harm's way. That's not what I'm about at all. No outcome of a game would influence me to be irresponsible as a head coach of a football team."

The now 24 - year - old Tagovailoa was previously listed as questionable due to a back injury for most of this week prior to the Thursday Night Football game between the Cincinnati Bengals and the Miami Dolphins.

The Miami Dolphins superstar wide receiver, Tyreek Hill, explained that other players were asking for updates on the Tagovailoa throughout the entire 2nd - half of the TNF game vs. the Cincinnati Bengals, but Tyreek Hill did not have any privileged information to relay to those players at that moment.

"You wanna win the game but obviously you wanna make sure that your brother is all right," Hill mentioned. "Football is just our part - time job, but that brotherhood is something that'll last forever."

The Miami Dolphins Back - Up Quarterback

The veteran back – up quarterback of the Miami Dolphins, Teddy Bridgewater, was forced to enter Thursday night’s match - up in relief of Tua, finished the football game by going 14 - for - 23 for 193 - passing yards, 1 - touchdown, and 1 - interception throughout the 27 - 15 loss handed down to the Miami Dolphins.

The Miami Dolphins had their rookie quarterback, Skylar Thompson, activated as well as prepared to play in NFL regular season action for the very first time in his career due to the trauma Tua has suffered lately.

The Miami Dolphins linebacker, Jaelan Phillips, expressed his concern for Tua by saying that it was hard to compartmentalize after watching Tua being taken off of the field on a stretcher.

"That's kind of what football is all about. We practice compartmentalizing every day. It's not easy -- we all love Tua," says Phillips. "It's definitely tough to try to refocus, but we tried." 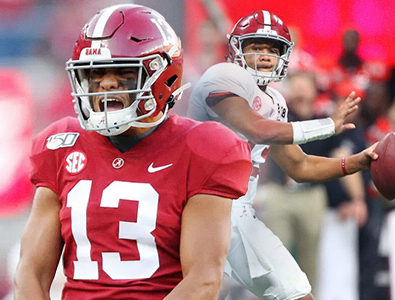 The youthful Samoan superstar quarterback (Tua Tagovailoa) was born in Ewa Beach, Hawaii. He played his high school football at Saint Louis School in Honolulu, Hawaii. As a standout play maker on the islands of Hawaii, Tagovailoa, chose to attend the University of Alabama under the tutelage of the famous and highly successful Crimson Tide head coach Nick Saban.

When healthy at Alabama Tua absolutely demonstrated incredible skill and leadership at the quarterback position. In 2017 as a true freshman, he backed up the starting quarterback for the Crimson Tide, Jalen Hurts. He got to see the field often during blowouts, and he did not disappoint when he was on the field.

Early on in the 2018 College Football Playoff National Championship game against the Georgia Bulldogs Hurts was proving to be quite ineffective and playing poorly at the quarterback position. Coach Saban decided to plug Tagovailoa in for the 2nd - half of the championship game, and this was a very wise decision.

Tua led Alabama to an explosive as well as extremely impressive second half offensively. He ended up throwing the game winning 41 - yard touchdown pass, and won the offensive MVP of the contest. In that title match up Tagovailoa went 14 of 24 for 166 - passing yards, 3 - touchdown passes, 1 - interception, and 27 - rushing yards on his 12 - run attempts.

In 2018 Tua earned the starting quarterback job at Alabama over Hurts which effectively caused Jalen to transfer to the University of Oklahoma prior to the 2019 college football season. Tagovailoa had an absolutely unbelievable year with the Crimson Tide in 2018 although they lost the 2019 College Football Playoff National Championship game to the Clemson Tigers.

He was the 2nd - place finisher in the Heisman Trophy race behind Kyler Murray, but he won the Walter Camp Award as well as the Maxwell Award. Tua was selected as the SEC Offensive Player of the Year, First - Team All - SEC, Sporting News College Football Player of the Year Award, and he earned All - American honors in 2018.

In 2019 Tua showed his true character and ability to lead Alabama even through a whole lot of adversity. While healthy he was spectacular early on this season as the Tide rolled through their competition with Tua at the helm. Then he suffered a high ankle sprain in the 6th - game against the Tennessee Volunteers which resulted in surgery, but he only missed one game due to this injury.

In his first game back from the ankle surgery he had to face LSU and one of the best college football quarterbacks of all time in Joe Burrow. This was an unbelievable offensive showdown between the two gunslingers. Despite a poor first half of this game Tagovailoa bounced back extremely hard in the second half even while hobbling on his sore ankle. He went 21 of 40 for 413 - passing yards, 4 - touchdowns, and 1 - interception in Alabama’s heart breaking 46 to 41 loss to the LSU Tigers.

Then in a game against Mississippi State Tua took a season ending sack in which he dislocated his hip fracturing the posterior wall as well as breaking his nose and suffering a concussion. This was the last snap of his college football career. He underwent surgery to repair his hip, and he has now been cleared by doctors for full football action ever since he joined the Miami Dolphins.