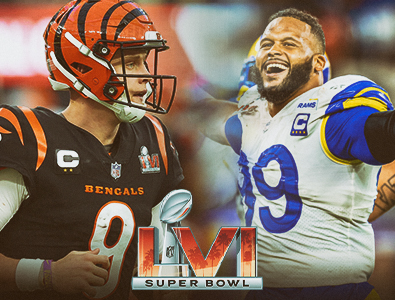 On Sunday, February 13th, 2022 the Los Angeles Rams took on the Cincinnati Bengals in Super Bowl LVI from So Fi Stadium located in Inglewood, California. Yes, this was technically a home game for the Los Angeles Rams, and wow did they give their home Los Angeles crowd one hell of a game to get excited about.

The Los Angeles Rams ultimately defeated the Cincinnati Bengals with the final score of 23 to 20. The game was capped off as the Cincinnati Bengals quarterback Joe Burrow was taken down by the Los Angeles Rams defensive tackle, Aaron Donald, who is arguably their best player and the best player on the planet. Following his game – saving tackle on Burrow, Donald pointed to his ring finger indicating that they had just earned their championship rings as the time on the game clock of Super Bowl LVI expired.

The award for the Most Valuable Player (MVP) of Super Bowl LVI went to Cooper Kupp. Kupp had a phenomenal day on the turf of the Super Bowl this season against the Cincinnati Bengals, but he dominated both the 2021 – 2022 NFL regular season as well as the 2021 – 2022 NFL playoffs. Cooper’s performance in Super Bowl LVI was good for 8 - receptions, 92 – receiving yards (11.5 yards per catch), and 2 - touchdown receptions on his 10 – targets from his starting NFL quarterback Matthew Stafford who also had an unbelievable game.

The Los Angeles Rams quarterback, Matthew Stafford, went 26 for 40 passing, good for 283 - passing yards, for an average of 7.1 yards per reception, 3 - passing touchdowns, 2 - interceptions, a quarterback rating of 60.8, and an overall rating of 879.9. Stafford was easily a runner – up for the Most Valuable Player of Super Bowl LVI along with their dominant defensive superstar in Aaron Donald.

“That’s hard work, that’s hours together,” Matthew Stafford exclaimed. “I just thank coach (Sean McVay) for putting it ... ‘Hey, Matthew, you and Coop go get this thing done.’ He kept calling plays for him, kept finding ways to get him the ball. He made unbelievable plays; that’s what he does.”

“You got to be relentless," Aaron Donald stated. "You want something bad enough you’ve got to go get it. You know it was right in front of us ... all offseason you work, you train, you got camp, you got a long season just for this one game. You know we the last team standing. I wanted it so bad. I dreamed this.”

“As far as building this stadium,” the Los Angeles Rams owner Stan Kroenke said, “I think it turned out all right.”

“I’ve said it all year, whatever is asked of me whatever my job is gonna be, I just want to execute to the best of my abilities," Cooper Kupp expressed. “I trust as the game goes on, I’ll have opportunities as well, and I just want to stay ready for those things stay locked in. It just comes down to this team and the way we prepared, the way we loved on each other, trusted each other.”

The head coach of the Los Angeles Rams Sean McVay said, “For the offense to be able to find a way, and then Aaron to be able to finish it off, it’s poetic, man. World champs, baby! We always talk about there’s something special about being a part of something bigger than yourself. These guys play for one another.”

“I was disappointed in my performance overall,” Joe Burrow emotionally confirmed. “That’s going to propel us into next year ... we’re not satisfied with what we did this year.”

“We wanted to be in attack mode and pressure them as much as possible,” the Cincinnati Bengals head coach Zac Taylor revealed. “Sometimes it worked, sometimes it didn’t.”