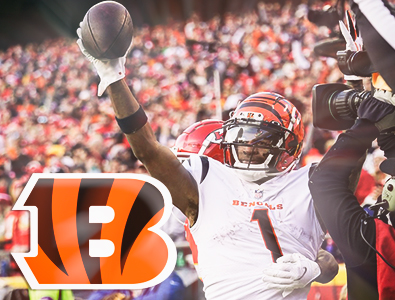 On Sunday, January 30th, 2022 the Cincinnati Bengals headed into the hostile atmosphere of Arrowhead Stadium to play the heavily favored home team of the Kansas City Chiefs in the 2022 AFC Championship Game.

The Kansas City Chiefs got off to a blazing hot start in the 1st – half of the contest as the Kansas City Chiefs led 21 to 10 at halftime, but the Cincinnati Bengals fought hard to come back and ultimately won the highly - contested match up with a final score of 27 to 24 in overtime.

This year’s Super Bowl will be played on Sunday, February 13th, 2022 at 6:30 p. m. EST, and the big game will be nationally broadcasted on NBC. Currently the opening line for Super Bowl LVI is the Los Angeles Rams at – 3.5, and the over / under has been initially set at 50 points.

"It's a special team that's capable of doing special things," the Cincinnati Bengals head coach Zac Taylor explained. “We’ve said that from the get - go, whether people believed us or not. We believed. So, we're not surprised."

"I'd say nobody blinked an eye," the Cincinnati Bengals rookie kicker Evan McPherson proclaimed. "I think we all thought we were going to come back and win the game."

"Usually when you lose the coin flip to those guys, you're going home," the Cincinnati Bengals quarterback Joe Burrow expressed. "Our defense really stepped up and made plays in the second half. And on offense we made plays when we had to. I thought the offensive line played really well all day. We started running the ball there at the end and that's exciting. Big win for us."

"I wouldn't call it surreal; I would say it's exciting," Burrow goes on to say. "I think if you would have told me before the season that we'd be going to the Super Bowl, I probably would have called you crazy. Then, you know, we play the whole season and nothing surprises me now."