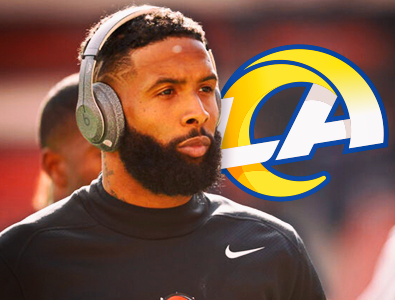 On Thursday, November 11th, 2021 Odell Beckham Jr. and the Los Angeles Rams have agreed upon terms to a 1 - year contract with the controversial free agent veteran wide receiver.

Beckham Jr. joins a Los Angeles Rams high - octane offensive unit mid – season. The Los Angeles Rams are presently led by their veteran starting quarterback, Matthew Stafford, and Odell only adds to a wide out depth chart at the position that consists of ballers such as Cooper Kupp, Robert Woods, and Van Jefferson. Beckham Jr. better not disrupt the offensive consistency that the LA Rams have worked so hard to develop during the 2021 – 2022 NFL season.

Odell recently became a free agent in the National Football League when he cleared waivers last Tuesday, November 9th, 2021 following his release that Beckham Jr. had requested from the Cleveland Browns a little while ago.

The Kansas City Chiefs, the Green Bay Packers, the New Orleans Saints, the New England Patriots, and the Seattle Seahawks were just some of the other teams that Odell had possibly considered joining as soon as he cleared waivers earlier this week. Ultimately, Beckham Jr. decided to sign with the Los Angeles Rams considering the fact that he thought this was his best chance to win a Super Bowl championship this season.

Matthew Stafford completely complimented his new teammate in Beckham Jr. who Matt said he had a lot of respect for, and whom he had previously played with at an NFL Pro Bowl before. Stafford praised Beckham for being "outstanding" both when the football has been thrown in the air as well as after Odell makes a catch and Matt said he was "excited" to have the opportunity to work with him on the Los Angeles Rams offensive unit. Although this may have all been the bullshit Stafford is paid and expected to say, we will see how well this new relationship works out in the city of angels over the upcoming several weeks.

The former diva wide receiver of the New York Giants and the Cleveland Browns is the 2nd high - profile football player that the Los Angeles Rams have added to their team roster this month, after the Los Angeles Rams boldly traded for the superstar pass – rushing specialist and former Super Bowl MVP, Von Miller, before the NFL trade deadline on Tuesday, November 2nd, 2021. Miller whole – heartedly welcomed Beckham Jr. to the Los Angeles Rams on his Instagram page by posting, "Let's chase this ring family!!!!"

According to the analysts at ESPN, “The Rams lead the NFL in total offense this season behind a potent passing attack led by Stafford, who is first in the NFL with 2,771 passing yards. Kupp is the team's No. 1 receiver and leads the NFL in receptions (74), receiving yards (1,019) and touchdown receptions (10).”

The Cleveland Browns excused Odell’s punk – ass from practice last week while the two sides negotiated his departure. Beckham Jr. had previously asked to be traded from the Cleveland Browns as he never really developed an on – the – field relationship with his former quarterback in Baker Mayfield. Odell basically demanded his release last week when Beckham Sr. shared an 11 - minute video on social media just minutes prior to the NFL trade deadline and this video consisted of plays in which Mayfield did not pass Beckham Jr. the football. Which was totally ridiculous if you ask me.

Odell has recorded just 17 - catches for 232 receiving yards and 0 - touchdowns over the course of his six games during this 2021 – 2022 NFL season. Beckham Jr. had 1,035 receiving yards in 2019, which was Odell’s 1st and possibly only reasonable season with the Cleveland Browns, but he did suffer a season - ending knee injury during the 2020 – 2021 NFL season. Beckham Jr. has passed the 1,000 - yard receiving mark on 5 separate occasions throughout his drama – filled NFL career.

Only time will tell if Odell Beckham Jr. has a positive place in the Los Angeles Rams looker room this season as he has been nothing but a problem in his last couple of destinations. 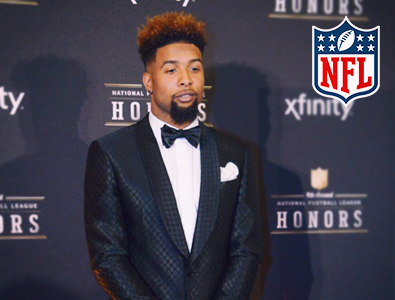 Stafford said if Beckham wants to win, "that's what we're all about," and he was confident he'll be able to contribute.

"Everybody on our team carves out their role. They do a great job of figuring out what that role is going to be and going out there and proving it both on the practice field and in games, and given the opportunities I know he'll do the same," he said.

"They had a good thing going, like a complete offense," Johnson said. "I don't know. I just feel, like, from being in L.A., I know for a fact the offense runs through Cooper Kupp; even in the run game, the pass game, the screen game, it kind of runs through Cooper Kupp. So obviously, Odell's a big name and he's going to want that attention as well. It will be interesting.

"Coach [Sean] McVay, he's one of the best doing it. He'll find a way to get it done, but right off the bat, I really wouldn't want to go there if I were him. But we'll see how it goes, and I wish him the best.''